I had an interview today for a temporary IT position with a product/service promotions company.  When the HR person, a person from the IT dept, and I entered the interview room, I saw a half full bottle of brandy sitting on the windowsill glistening in the sun.  When I pointed it out to the HR person midway through the interview she said, “We work really hard here and apparently we play hard too,” in an uncomfortable tone and with a nervous laugh. 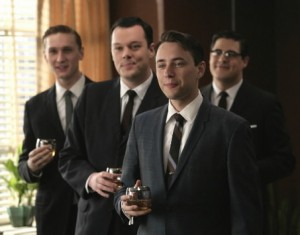 I was later called by the recruiter to let me know they wanted me to start later this week. I pushed back with a higher hourly rate and am waiting to see if they can meet me at that hourly rate.  I’m not a drinker and don’t go to bars, etc., and am a little worried about what I saw.  I’ve never seen this kind of thing in a work environment.  Is this common?  Should I be worried?

I mean, I doubt that they’re doing Jello shots in the middle of the day or anything, but I suppose anything is possible. There are all kinds of potential explanations — from the bottle being left over from the holiday party to it being an office full of lushes.

In any case, I’d just ask the recruiter and/or the hiring manager (not the HR person) about it directly. Say something like, “There’s one thing that’s been on my mind — when I interviewed, there was a bottle of liquor sitting in the room, and it made me wonder if drinking plays a big role in the culture there.”

But even if it turns out that they have drinks in the conference room every Friday afternoon, that doesn’t necessarily mean it’s a culture where you wouldn’t feel comfortable. There’s a big difference between the occasional social event with alcohol where some people choose iced tea without anyone batting an eye and a culture where the CEO is passing out on her desk and interns are throwing up in the bathroom. You need to ask enough questions about the culture in general until you know which this is.