Remember the reader whose former coworker wanted to throw a party, invite most of her old coworkers but exclude a handful of people, have the CEO pay for it, and create t-shirts promoting the party for people to wear to work? Here’s her update. And it’s … weird.

I contacted my friend again to tell her that I didn’t feel comfortable with the t-shirts and exclusionary piece of the party. She responded terribly and was really, really rude to me. I was able to see how selfish and ridiculous she was being for the first time. Nonetheless, I was taken aback by how she responded, and I didn’t reply to the barrage of nasty texts that she sent me. The next day, she apologizes for being “harsh.” I tell her I appreciate the apology but don’t know how I want to address the other nonsense. Then, she goes psycho again and basically says that we just don’t need to talk anymore and all she’s done was “respect my opinion.” I was able to see how clearly she did NOT respect my response or thoughts. I never responded to her “cutting me off.” Ten minutes later, she replied to an email I sent a week or so prior with details for a possible trip the two of us could take to say the trip couldn’t happen right now. I just laughed and thought mean things about her to myself. I had a chance to process everything and wasn’t upset this time around because I was exposed to her strangeness, and I felt I’d make the perfect decision to stop talking to her.

Two weeks pass without any word from her, and I was fine with it. Then, because of how small our network is, she hears that I was offered a new job and calls me to congratulate. Of course, I ignore the call. She then texts me to say that she wanted to wish me well and I tell her thank you. The next day, she texts me again (and this is the start of the unexpected), to say that she’s decided not to host the party. She says that after some deep thinking and reflection, she gets that it would be inappropriate for her to do and that she just needs to take this time to heal and accept she’s not part of that workplace anymore. I was actually impressed by this realization but still pretty intent on not continuing a friendship with her. 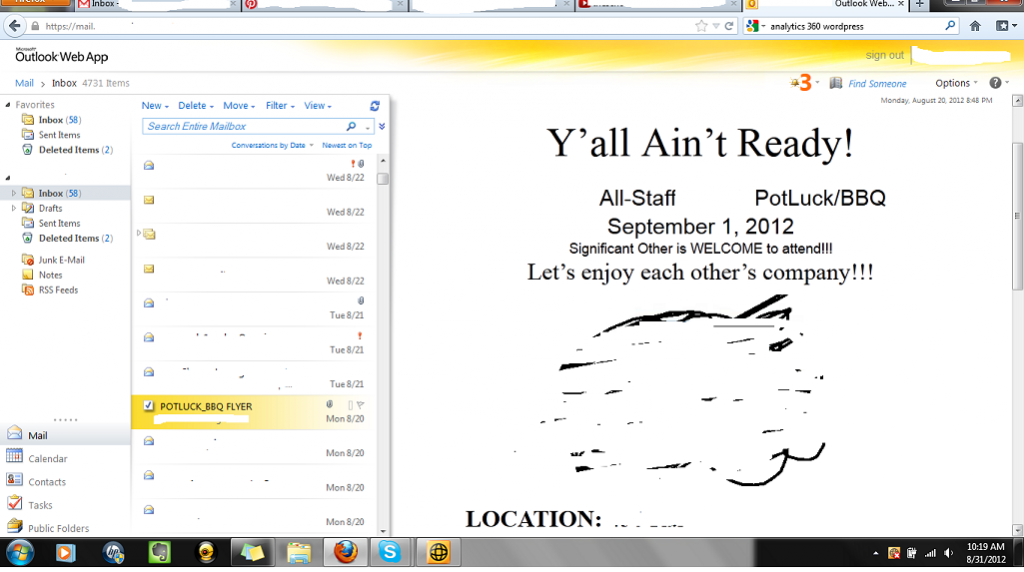 Then I check my old work email to tie up lose ends there and update some of my contacts to my new email address. What do I see (see attachment)?  An email to all staff publicizing this party (yay) from the very woman that my friend told me wanted to keep it “exclusive.” I laugh to myself again because it’s so unbelievable.

So I won’t be going to the party after all…. since I get that I don’t work for that company anymore…which incidentally is what started this jazz in the first place. So that’s that. End of story.