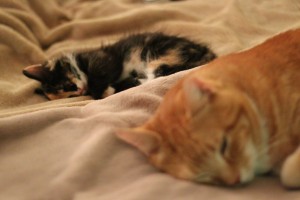 Pictured: No longer a foster kitten. We’re adopting her!