I received a connection request from a stranger on LinkedIn, and by the end, we both ended up feeling that the other person had been very rude. I followed my instincts and didn’t engage further than the conversation reproduced below. I still think about what I’d say to set this guy straight regarding professional norms, but a part of me wonders if I was the one that was rude. Care to weigh in?

For clarity, while we work in the same industry, we shared no contacts, previous companies, or locations. He could message me because we both joined the same public LinkedIn interest group. I’ll usually just ignore such requests, but inexplicably didn’t this time. 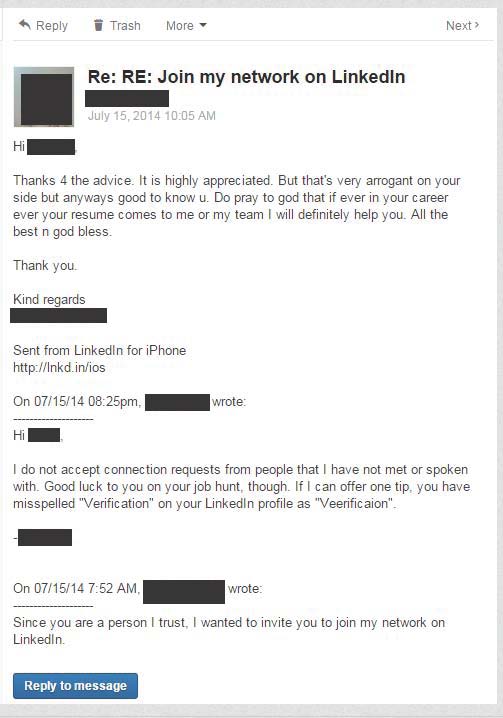 This is why people so frequently don’t help strangers — because said strangers are often rude in return.

You weren’t rude here. You explained a perfectly reasonable policy of not connecting with strangers (a preference shared by many people on LinkedIn), and you pointed out to him an awfully embarrassing mistake on his profile.

The correct response from him would have been “thank you” — not calling you arrogant or implying you’re a dick.

I’ll never understand why people shoot out bitter responses like this in the heat of the moment — whether it’s rejected job applicants or situations like this one. There’s no faster way of confirming that the other person made the right decision (to reject, to not network, or whatever it might be).