It’s a special “where are you now?” season at Ask a Manager, where all month I’m running updates from people who had their letters here answered in the past.

Remember the letter-writer whose new job in property management appeared to be built on a hellmouth? (First update here.) Here’s the resolution.

The last time I sent in an update I was still at the Hellmouth, it was becoming increasingly obvious that my manager was actually a lying jerk — and she was also setting up secret video and audio surveillance in my personal office, weird disasters and unusual phenomena were still occurring pretty regularly, residents were still being extra horrible, and I was applying and interviewing my heart out anywhere that sounded halfway decent. Well, things wound up getting much worse before they got better, and it took a really long time, but (spoiler!) I got out!

Things got truly bonkers before that happened, though. (I posted about it pretty regularly in the Friday open threads —an awesome commenter rounded up a huge chunk of those threads here if anyone is interested in watching me slowly lose my sanity.)

My manager went completely off of the deep end. In addition to planting hidden microphones and cameras all over the place (mostly in my office), she did all kinds of truly out there stuff (such as taking checks out of my moneybag and trying to hide them so she could write me up for not processing them, telling staff members that she needed them for a project on property before putting them in her vehicle and then driving them off property without their consent in order to interrogate them, declaring a War on the Children on Property, declaring a very problematic War on People Wearing Hoodies, who all happened to be POC). But that’s okay! Because my awesome leasing consultant got another job and agreed to go to HR and verify everything if I wanted to make a complaint. And, well, I very much wanted to go and make a complaint!

I wound up sending them all kinds of documentation — the timeline for the hidden check thing, photos of all of the surveillance items, dates and files for shady things that she did with resident accounts, in depth and verifiable accounts of her doing shady things to employees, proof of payroll fraud … just, a LOT. And after three weeks of waiting for something to happen, I finally sent an email saying I was still being recorded without permission and I needed it to be dealt with immediately. Well, suddenly the cameras came down and the atmosphere at work got very weird and then Hell Boss was EPICALLY FIRED. That whole firing story is pretty wild, and recounted here.

Once HellBoss was gone, there was at least no one actively trying to destroy me (although we did have a flood of bad online reviews from fake residents that were definitely her—every single one of them included high praise for her and talked about how terrible everything was now that she was gone). It was still pretty awful, though, and I had to do the work of the manager and two leasing consultants in addition to all of the assistant manager duties. And still had to work every weekend. Plus there were still wasp situations, giant snakes slithering through the office (non-poisonous but still… alarming), and scary resident situations (teeny-tiny sampling: someone got shot on the property, there was an unrelated car chase through the property when another resident fled the scene of a hit and run, etc.). Because of course they did. Although I was very grateful for the awesome temp I had in the office (we still text occasionally, she is just a terrific person) and I did get a foster boss who came in from a neighboring state for a few days every two weeks or so who was great (she became an excellent reference for me), working there was still the stuff that fuels nightmares. Also, shortly after HellBoss was vanquished from the property we learned that the property management side of our company was going to CEASE TO EXIST in very short order, and all properties would be taken over by a new management company … once they lined one up.

So yeah, I (finally) got the hell out of there. It turns out “company I work for will cease to exist by the end of the month” goes a long way towards making leaving a job before you’ve been there a year look a lot less flakey. So, uh … thanks, Hellmouth Overlords, I guess?

I took an interim job as a leasing consultant (a step down in pay and position, but also in responsibilities, which I really needed at that point) at a luxury property while I continued to look for a way out of property management and cooled my heels while waiting through the lengthy process of interviewing for positions with state government agencies. It was a really nice break/recovery period with a kind manager and pleasant coworkers, and the worst things I dealt with were jerks trying to force their way into the office an hour before opening, rich people being ridiculous, and rich white dudes finding a way to “casually” mention how much money they made or namedrop famous or influential people they knew every time I had to tell them no or explain why I couldn’t do what they wanted. CHILD’S PLAY, y’all.

I found my in with a mildly dysfunctional but friendly state agency as an upper level admin/HR liaison before I was even at that job long enough to need to put it on my resume. After being at the new job for about a year and a half, I got a call from one of the HR people who had helped train me back when I started. She had left to work for another state agency’s HR department as a manager, had an HR analyst position open up on her team, and wanted me to apply! Since moving into HR had been my ultimate goal since I left the Hellmouth I jumped at the chance. I secured the job, moved on over, and have been here for about three months now. I’m making better money than I did at the Hellmouth, everyone on my team is friendly and helpful and making sure my training is going well, my boss is incredibly supportive and kind, and I’ve lucked into an agency that is super funded and has a lot of extra perks. The work is very challenging and I still have a great deal to learn, but I really like it. And once I’ve been here for a year I will qualify for a tuition reimbursement program, and my boss has already told me that she’ll approve me for it so I can get a masters degree in HR. Hooray! I AM NEVER LEAVING.

I have seen Hellboss exactly one time since her dramatic exit, but immediately ran and hid so she didn’t see me. I do not regret this. I will do it again. I was worried about a frivolous lawsuit from her, but Covid shut down everything at about the time she would have hit the deadline for filing and I guess she had other things on her mind. She is apparently now working at a local property management company as a regional manager, which is a big upgrade from a property manager—no idea how she managed that but I’m not surprised as she always seems to land on her feet.

Also, please accept this drawing my younger brother drew and sent me right after the HellBoss Showdown as a further I-can’t-believe-it-took-me-so-long-to-send-in-this-update apology. Fun fact: I asked him how he knew what she looked like and he told me he Googled Lovecraftian Nightmare and her image popped right up! 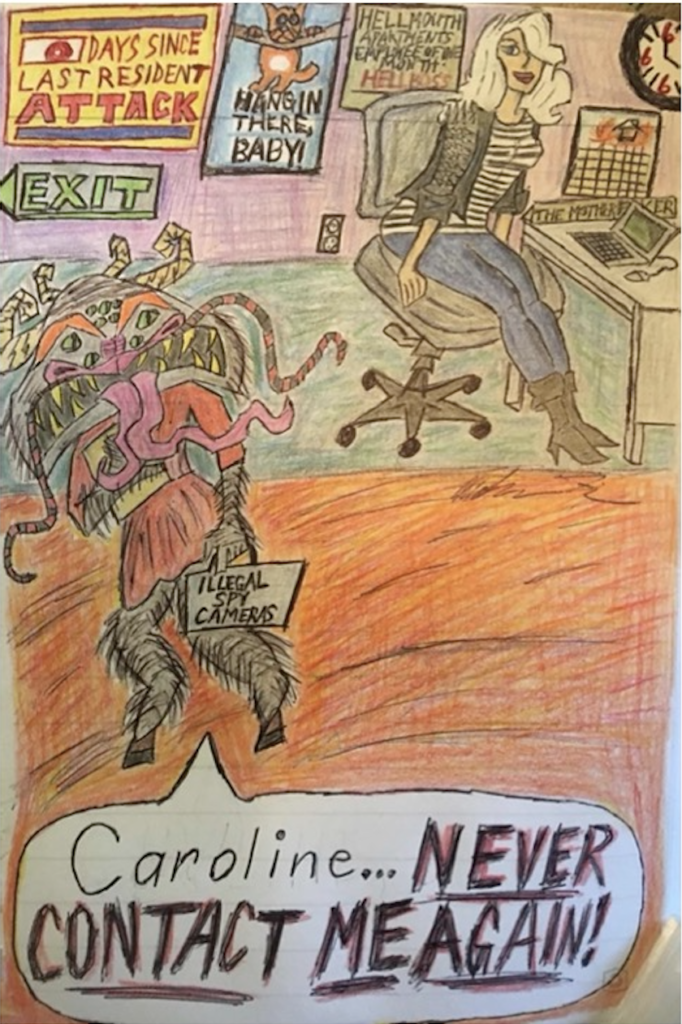