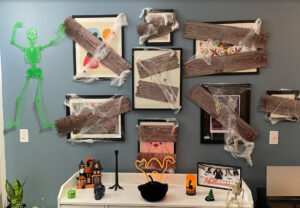 I am going to be starting a job search relatively soon and am wondering whether to leave my office decorations in place. I am a remote worker and would be looking for a new remote position, so presumably would have on-camera video interviews. I decorate my office wall (visible in webcams) for Halloween and Christmas and am wondering whether I should leave them up or take them down.

On one hand, I like that it shows my personality, I get a fair number of compliments on my decorations, and it could be a flag to my current employer to see the decorations removed. On the other hand, I don’t want to come across to a new potential employer as not taking the role or interview process seriously and have put a good bit of effort into styling the wall to look presentable.

I’ve attached a photo of what it looks like currently. Nothing too spooky or over-the-top, but noticeably decorated.

Agh, I’m torn. It’s not that showing any personality is bad, but I do think there’s a chance that some interviewers — not all of them, not even the majority, but some — will think it’s a questionable choice of backgrounds … not because there’s anything wrong with the decorations themselves, but just because it’s potentially distracting. And as a general rule for interviews, it’s in your interests to use a background that isn’t distracting, to the extent that you have that option — because you want your interviewer focused on you and what you’re saying and not trying to make out exactly what’s on the wall behind you. So if it’s relatively easy to give yourself plainer background, I’d go that route.

2. Was I wrong in how I handled noise outside my office?

This happened a long time ago, and every time the memory comes back, I get a bit tense at the awfulness of the day. I once worked for major international professional services firm. Once a year, all the partners would go on retreat and on that Friday, all the office staff left would have quite a relaxed time of it — those who weren’t in my role, that is, as I’d often get urgent last-minute research tasks. I reported directly to the head of the office, and worked ad hoc for partners. Other staff were secretarial/operational and there was only one of me.

One year, one of the secretaries brought their kids in, and they were in party mode all day just outside the glass partition door to my office space. Noisy, and I had a lot to get done. This was not a place where headphones at work were a thing. When I closed the door, I was asked, “Are my kids disturbing you?” and I said, pretty grumpily, “Yes — some of us have work to do today.” The retaliation was FIERCE! I was called mean-spirited, the entire floor was gossiping about me, and I ended up going home in tears. Looking back, I could have been more polite in my response, but I also wonder whether the questioner was just expecting a cheery “oh no everything’s fine.” Maybe they were retaliating in case I reported them to their boss. I don’t know, as I also don’t know whether the kids had permission to be on site. I just wonder why this still rankles! I’m in a completely different industry now, and I think my response would be different. I’d be interested in your take on this!

Yeah, your response was pretty hostile! I don’t doubt that the noise was annoying — and it wasn’t okay for your coworker to let her kids disrupt the office all day — but you would have been better off saying something like, “It’s pretty loud and it’s making it tough to focus.” Hell, you could have stuck your head out even before she asked you about it and asked her to quiet down or move the group somewhere else so you could concentrate. That would have been fine!

But “some of us have work we need to do today” is snarky, and the subtext is “you don’t have a work ethic and I do” — which might have been true, who knows, but it’s pretty much always going to be taken as hostile. That doesn’t mean the way your coworkers responded was justified, but it’s not surprising that they reacted poorly.

3. Should I acknowledge to the people I manage that their recently departed coworker was A Problem?

I started a new role this year managing a team of three people. A few months in, it became clear that one of my employees was no longer happy in the role and was not performing well. After some unsuccessful attempts to work with this person to adjust the job conditions and improve their performance, we settled on a six-month exit plan that would allow them to finish the projects they were working on.

Throughout the six-month period, this employee became even more unmanageable and unprofessional — frequently being very late or absent, cursing when clients were in the office, making excessive non-work calls during the work day, and resisting any oversight of their increasingly sloppy work product. I have not discussed any of this behavior with the other team members (I have discussed it with my own boss) but I’m sure they have noticed it. My other employees have had their own issues but are always very receptive to feedback and I’ve seen real improvement in their work and behavior when feedback is given.

Now that the six-month period is over and the problem employee is gone, would it be appropriate to say something to my other employees acknowledging the bad behavior, apologizing for any impact it had on the rest of the team, and letting them know I recognize their hard work? In general I think it’s not appropriate for a manager to discuss one employee’s personnel issues with other employees, but I don’t want them to think I was oblivious to or okay with the behavior.

The thing is, you kind of were okay with the behavior — at least in the eyes of your team, because you allowed it to continue and didn’t use your authority as the team’s manager to stop it. There’s not a lot of value in saying now “I saw issues XYZ and I wasn’t okay with them, and I apologize for the impact on you”; if anything, it’s likely to frustrate them more because it will feel like empty words (since if you weren’t okay with it, why didn’t you take action?).

The time to act was earlier, when the employee was causing problems. It sounds like once you made the six-month agreement, you basically stopped managing this person (maybe because you figured it wasn’t worth it since they had a departure date set?). But agreements like that only work if it’s clear that the person will still be accountable for their work and conduct while they’re there, and that you will end the agreement if they don’t keep up their side of it. You’ve got to be willing to say, “This isn’t working and I need to see XYZ changes right away or we can’t keep you on for the rest of the time we talked about” and then follow through on that.

It’s too late for that now, of course! All you can really do is resolve to be more hands-on in addressing and stopping problems in the future. If your team sees you doing that, that’s going to carry more weight than an apology now will.

4. Did my referral really refer me?

I recently found a job I’m uniquely qualified for. I have a former coworker at the company, and messaged him to ask if he would refer me for the role. He said yes and asked me to send him my resume and cover letter, then said he’d speak to the hiring manager. Normally when I am referred for a job in this way, I receive an email notifying about the referral and asking me to input information on the company website. In this case, I didn’t receive such an email, or hear anything at all.

I emailed my contact to check in about a week later and ask if there was anything else I needed to do. This time he mentioned he’d speak with someone else in the company about my candidacy. I still haven’t heard anything official letting me know I’ve actually been referred within their system. The company recently re-posted the original job description, leading me to believe it’s still open. Should I apply through LinkedIn, just to be sure that my resume is getting into the correct hands? I don’t want to insult my contact by applying through a different channel, but I really want to ensure the recruiter is seeing my information.

Definitely go ahead and apply directly because maybe he’s on top of this but maybe he’s not. If he did refer you, applying directly won’t hurt your chances. If he didn’t, it’ll get you into their system. If you want, you can send him a message saying, “Just letting you know I also submitted my materials through the online application portal just to cover all my bases and make sure I’m formally in the system!”

5. I list myself as “open to work” on LinkedIn but then ignore recruiters

I am not overly active on LinkedIn, but I add almost everyone who sends me an invitation to my network and keep my work history up-to-date. I frequently get messages from recruiters sending me job postings and wanting to set up time to discuss them. I have never responded to these messages though. I don’t enjoy networking and even though my profile says “open to work,” I’m not actually in a place where I want to interview other places right now. I tell myself that I’d always be open to the right opportunity, though, which is why I always have my profile set to “open to work.”

Is it unprofessional to list myself as “open to work” but not respond to recruiters? Also, what are a recruiter’s expectations? Will they look negatively at me if I don’t respond now, but down the road reach out once I am more actively looking for a job?

I hear from a lot of my coworkers that they regularly take calls with these recruiters to keep their options open, see what other companies are paying for similar roles, and grow their network, but I really don’t want to have to take these calls with random recruiters.

It’s not unprofessional to list yourself as “open to work” when you’re not actively looking to interview. It sounds like you’d be willing to interview for the right opportunity, so you’re not being misleading. (If you really want to be thorough, you could think about whether that’s really true — do you know enough about the jobs you’re being approached about to be in a position to spot the ones that might really interest you without hearing more from those recruiters? And if not, do you care? It’s fine if you don’t.)

But it’s not a big deal to ignore recruiters, even if you then want to contact them later. Recruiters are very used to being ignored by people they contact — these are cold contacts, after all — and they’re not going to hold it against you later (if they even remember).

All that said, it’s not a bad idea to occasionally talk to one of them, for exactly the reasons your coworkers do.