Buzzfeed just did a round-up of their 23 favorite Ask a Manager letters. It’s full of classics. You can read it here: 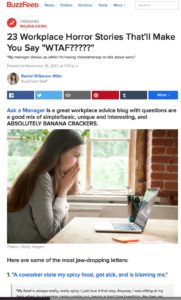