1. Is it unprofessional to have my baby on video conferences?

I work from home, and my five-month-old son goes to day care twice a week. On the other days, my husband cares for him and brings him to me when he’s hungry to nurse. He’s a super chill, happy baby, so sometimes when we’re done I hold him while I do work. I especially do this if I’m on a conference call because I know that I can listen and be fully engaged in the conversation and hold my son at the same time. If he needs something (most often a diaper change or a nap), I hand him back to my husband.

My workplace is very family friendly, and encourages us to “bring our whole selves to work.” No one has every said anything negative to me when my son shows up in a video conference, though occasionally they do send me personal chats about how much he’s grown or how cute he is.

I think of it as bringing the “mama” part of me to work, because there are definitely ways that being a mom has made me a better worker. I’m interested in your opinion though — could this be seen as unprofessional? Should I turn my camera off when I hold him so that people can’t see him?

It really depends on your office. In some offices this would be fine, and in other offices (probably more of them) it would be seen as unprofessional. And some offices would be mixed; some people there might think it’s fine and others might be annoyed by it. (I’ll be honest — I wouldn’t love it and would find it distracting, and I like babies.) But the question is really just how it goes over in your office.

Unfortunately, one of the problems with the “no one has ever said anything negative to me” method of determining how something is going over is that people won’t always say something directly to you. But you can always do a reality check by privately asking your manager, “Hey, would it be better for me not to hold Falcon during conference calls when people can see me, or even just to turn my camera off if I have him?”

One thing I’d say either way, though: if “when he needs a diaper change or a nap, I hand him back to my husband” means that he’s doing any crying on the call that can be heard by others (assuming that’s what causes you to hand him over), be more cautious there. A crying baby on a conference call is disruptive in a way that a sleeping baby is not, even if it’s just for a minute before you hand him over.

2. Bumper stickers when you drive clients in your car

I work in a social services field where the majority of the employees work directly with low-income families in the surrounding communities. One of the staff at my location pointed out that an employee at another location in the agency — someone who sometimes shares clients with us — has an anti-abortion bumper sticker on her car. It would be one thing if she were just parking in the lot at work, but she uses her car to transport clients frequently. Our clients come from all kinds of circumstances and have been through a variety of hardships, and the concern our staff member raised was that seeing this sticker could be really alienating for the families we work with.

I guess my two question are:
a) Is there anything I can do to address this, and if so, what? I think there’s probably very little, as she’s not someone who reports to me, but it really worries me, ethically, that families might be impacted by this.
b) What would your recommend in a situation like this if I was her supervisor? Would it be a different answer based on whether or not families or staff had raised concerns?

If your staff are expected to use their cars to transport clients, it’s reasonable to require that they not have stickers on their cars that promote political viewpoints or viewpoints that might reasonably be believed to be alienating to some of the people you serve. That’s not about targeting this employee in particular; it’s a good policy across the board, because you also shouldn’t have people transporting clients in cars with bumper sticking promoting, say, a political candidate or an immigration policy that might be counter to your clients’ interests.

How well-positioned you have to make that suggestion will depend on what your job is there and how much influence you have, but it’s certainly something you could suggest (and when you do, you could use this particular bumper sticker as an example of what concerns you).

3. Is this rejection cruel?

I applied for a job knowing that I was under experienced. It was a one click Indeed post. I still crossed my fingers and hoped they would look at my resume but they wrote this. I felt it was a little cruel. Is this rude or am I overthinking it? See his message below.

“I’m afraid we’re looking for experienced hard news reporters. You may want to have someone copyedit your cover letter. I have put in bold some mistakes.”

It’s brusque, but news rooms are pretty known for being brusque. And tone aside, he’s actually doing you a favor if there are indeed mistakes in your cover letter, since that’s something that you want to be really polished if you’re applying for writing jobs. He didn’t have to take the time to flag that for you, and it’s actually kind that he did, even if the delivery isn’t ideal.

4. My instructor asked some of us to hang back because others needed practice more

I just finished attending a continuing ed certification workshop. I run a farm, and this was an agriculture related training. The class covered information (A) and skills built on understanding that information (B). I went into the class much more interested in A, but still pleased to gain the skill & certification at B. When asked about my motivation in taking the class, I was honest about this, and the instructor teaching B went on to the lecture the class at length about how, if we weren’t there primarily to learn B, we should step aside during general practice sessions for those who were planning use B after finishing the course.

This was an expensive training, paid for out of pocket, and to ask me to intentionally get less out of it seemed inappropriate. If there was inadequate practice material, that’s a problem that belongs to the course instructor/facility, not mine as a participant, and I didn’t feel it was my job to watch the group for participation levels, understand everyone else’s intention for use of material, etc. I decided to just keep on participating during hands-on portions as I would have otherwise, and went on to successfully learn B. I do plan to continue using B, now that I know I’m suited to that work. I waffled a little about asking the instructor for clarification or pushing back a little on his instruction during the class, or giving feedback to the hosting institution after, but eventually just let it slide off. Would you have spoken up or given feedback in some way? 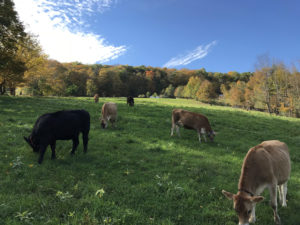 Thanks for your time and all you do, it’s been immensely helpful to me! I’ll attach a cute cow photo, in gratitude.

I think you handled it well — you went ahead and participated the way you wanted to, and which you had paid for. Sometimes just taking the action you want to take is in itself an assertive way of handling something like this. But if you’d gotten any push-back, at that point you could have said, “Actually, I really want to learn this as well and it’s one of the reasons I paid to take the class.” It also would have been fine for you to give feedback afterwards, explaining that you were put off at being asked to hold back on part of the skill-building that you’d thought you were paying for, just because others were judged to have a higher need for it than you. (But it’s also fine that you didn’t do that. You’re not required to expend energy setting people straight if you don’t feel like dealing with. Either way was fine as long as you got what you needed, which you did.)

5. Who should I ask to nominate me for an industry award?

My field has industry awards for which candidates must be nominated by two people (self-nomination is not permitted). The primary nominator must write a letter of recommendation for the awards committee to review. I believe I would be a worthy recipient of a certain award, but I am hesitant to ask anyone to nominate me. It feels like gauche self-promotion in a way that asking for a job reference does not. However, it is quite rare in my workplace that anyone decides to submit an award nomination of their own accord, so I think prompting someone may be necessary.

I am also unsure whom I could ask. Obviously, asking a direct report would be inappropriate, but would it be better to ask a peer versus a supervisor? I know that a manager would have a better sense of an employee’s work quality than a coworker might. I have a good relationship with my boss, but I worry about expending capital by asking a favor that is not related to the workplace, especially since my boss is always busy.

Ask your boss! This is something most good (or even slightly good) managers would be happy to do for you if you’re a great employee — and keep in mind that if you get the award, it’ll reflect well on her. The fact that she’s busy doesn’t mean she wouldn’t be up for doing that (just like she’s probably happy to take the time to give references for strong former employees, etc.).

(Of course, the important caveat here is that you’d want to be sure that you’re a strong candidate for the award and that your boss is happy with your work. If your boss has been giving you a lot of criticism, especially in the area this award recognizes, this could come across as tone-deaf and make her worry you’re not processing her feedback.)