It’s a special “where are you now?” season at Ask a Manager, when I’m running updates from people who had their letters here answered in the past.

Remember the letter-writer whose company said it was dog-friendly but then issued a policy that seemed to exclude dogs who weren’t therapy or service animals? Here’s the update.

I wrote to the HR director using some of the language suggested by Alison (that the policy seemed to say dogs were only allowed for medical purposes), and pointed out that the practical effect was likely to ban all dogs except Mr. Goodboy,

The reply read: “Thanks for reading the handbook and for reaching out for additional information. The intent of our Pet Policy was for the protection of our people (employees and visitors), the pets, and our property. It was not written to exclude or include any specific pet. This was a difficult policy to construct and we did much research to get to a policy that would provide safety and enjoyment for both people and pets. The request for a trained therapy or service animal is to help ensure that the pet be accustomed to people in both a one on one and a group situation. This provides less stress on the dog, our employees, and visitors to our workplace. We used the word should in this portion of the policy as we recognized that not all pets will qualify as a therapy/service animal; but could still be a good corporate pet.”

(There were some commenters who speculated that the word “should” in the policy language stating, “Dogs should be a trained therapy or service animal” meant that technically, it wasn’t a requirement. So, you guys were right! It never even occurred to me that this could be the case because it seemed like such a fine, legalistic distinction.)

Anyway, I replied: “Thanks for writing back with more info. This helps clarify for me that I should not bring in my dog anymore (as you’ve seen, he is shy and not comfortable around people in the way you specify). That’s disappointing, but I do understand the need for a consistent policy that ensures the best outcomes for both employees and pets. I’m sure it will be a while before the handbook is updated again, but when it is, I’d like to suggest the addition of some clarifying language to ensure other employees understand that they may be able to bring a dog that isn’t specifically certified as a service or therapy animal (I definitely took “should” as synonymous with “must” and can only assume that other employees will take it the same way). Perhaps “Dogs must display a level of obedience, training, and comfort around people commensurate with a service animal or therapy dog”? Or perhaps a version of the language you yourself used to clarify the policy, which was so helpful to me? (I say this with no intention of disrespecting the research you’ve done on the topic – I just want employees to be able to take full advantage of the dog-friendly policy without any confusion.)”

I didn’t receive a reply to this message, and the handbook hasn’t been updated again.

So, the state of dogs in my office as of February was as follows: I hadn’t brought in my dog again. No one else had brought their dog in. Even Mr. Goodboy’s visits had been severely curtailed (his owner, “Jane,” was concerned by other parts of the pet policy that limited her ability to let him range freely around the building and join her in meetings. She began working from home more often and keeping him shut in her office when she was in). My manager who had been considering getting a dog did not get a dog. A few coworkers expressed disappointment to me that my shy rescue dog wouldn’t be returning, saying that the spirit of our mission would be to help him become socialized around people.

So it doesn’t seem to me that the “dog-friendly” policy resulted in people feeling comfortable bringing dogs into the office. I think “on the level of a therapy dog or service dog” seems like a high bar for most pets to meet, and something like the AKC Canine Good Citizen standard should have been used instead, if we’re really going to be a dog-friendly office.

Of course, then the pandemic hit. Now we’re all working with our dogs in our “offices” at home. We’ve always had a very flexible work-from-home policy, and I personally don’t plan to go back to the office until the danger truly seems to have passed. My dog is happy to have me (not to mention my husband and our baby) at home for the time being.

There were several discussion threads in response to my original letter suggesting that Mr. Goodboy might actually be Jane’s service dog, as opposed to a therapy dog. I was never really clear on why this would matter, since either certification would allow him access to the office under this policy, but I did try to clarify. One evening at an after-work gathering, the pet policy came up and I used the opportunity to ask Jane whether Mr. Goodboy was a service dog or a therapy dog. Her response was that he was originally trained as her service dog, and now he is her therapy dog. I didn’t inquire further so as not to pry into her medical history.

Some of the comments suggested (politely) that I was complaining that my dog didn’t have the same privileges as a service dog. I understand that it’s my employer’s prerogative to restrict dogs in the office, but I also get why those commenters might have read my question as “here’s the new policy and whyyyyy isn’t my dog allowed anymore???” because the policy looks like a pretty normal one for many offices. But what drove me to write in was the confusion of describing this policy as “dog-friendly.” 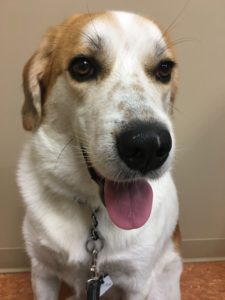 There was a brief but interesting discussion of employers announcing something negative for employees and trying to spin it as a positive, but I want to emphasize that that would be pretty out-of-character for my employer. This isn’t an organization given to obfuscation or double-speak; I was confused enough to write in because I genuinely thought perhaps the wording of the policy was some kind of mistake. Thanks to Alison for providing me with the reality check of, yeah, it’s weird wording. It doesn’t seem likely to change any time soon, but that’s OK – this is overall a great company that looks out for us in so many ways, one confusingly-worded policy isn’t going to spoil that.

Finally, there was at least one wish to see a photo of Mr. Goodboy. I won’t do that without his owner’s permission, so instead, please enjoy this picture of my own Mr. Shyboy.