Here are four updates from past letter-writers.

1. My phone number used to belong to a sex worker

Thanks so much for answering my question. I ultimately ended up changing my number, not because I was worried about a job search, but because I was tired of getting 3am calls from guys wanting friendly business.

It was wild rereading that letter; I’m in a totally different field then. I’m actually a recruiter and have been in what I’d consider close to my dream job for almost six months. Your blog principals are something I strive to incorporate in my recruiting – I always include pay in first listing or message, I try and review people’s backgrounds on Linkedin if I message them, and try and give feedback where you can. I saw another blog post about paying it forward and I volunteer on a Discord server giving job feedback to people on their resumes and the like. (I think I sent an email once saying I recommend your site quite often there, too – one person even told me It helped them land a job.)

Again, thanks so much. I know this is a long update to a short question but you’ve greatly influenced my life and I don’t know where I’d be without this colum. :) 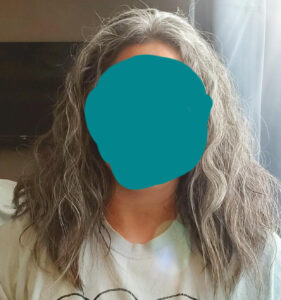 I wrote to you seeking advice for going gray professionally. Many commenters said to not do anything and just let it grow out so that’s exactly what I did.

No negative repercussions. In fact a lot of people comment on how good it looks. I’m surprised by how many women comment they wanna go natural too. Lots of positive comments like they wish their hair was this gray all over naturally, or how thick my hair is.

My profile pic at work is still an old professional photo that I got done when I did used to color so I thought newbies might comment on how different I look but no one has said anything. I also haven’t noticed any ageism or taking me more or less seriously.

3. I don’t want my boss to represent me at a meeting because he’ll mess it up (#2 at the link)

I appreciate you answering my question and all of the input from the commentariat. I think I knew the answer already, but confirmation that there isn’t much to be done is helpful; at least I know there isn’t a solution out there that I’ve been overlooking all along.

As it all turned out, I did a little of both — ask the committee if another date was possible and write up notes for my boss, just in case. This was not the type of meeting with PowerPoint presentations, as commentators suggested creating slides, and I could have sent notes directly to the VP’s assistant if necessary, but it might not get discussed if I wasn’t there to answer questions. I actually didn’t go into too much detail for my boss because that’s where he seems to get the most in trouble — picks a small detail and runs away with it; I don’t want to add fuel to the fire so to speak. So I bulleted 3 main points with a sentence of detail hoping that might keep it simple.

And then, the VP in charge of the meeting rescheduled (unrelated to me) and I was able to attend after all. It went well, I think, although the VP and rest of the committee rejected the main suggestion I had to improve the process — fewer people involved and fewer rounds of drafts — I knew that was going to be a long shot, but it was the point I most wanted to make without my boss getting…creative! The committee is mainly made up of folks much higher in title than I, but we’re a more egalitarian org so I felt delicately OK suggesting the committee is…too much. Philosophical difference — they think more eyes on the project equals the less chance for errors slipping through, and I think (and observe) that the more people involved, and more rounds of drafts, equals more introduced errors. There is a great diminish on return after about draft 7 (out of 13-14 usually). By then, they aren’t really reading it anymore and this is where stylistic differences, rather than facts and consistency, get “argued” back and forth between the members of the committee…every year. We did work out a compromise that the VP will provide a style/rules rubric and reject any edits that don’t conform. We’ll see how this goes in a year. Any improvement is still an improvement.

I did get a chuckle out of the comment thread started by Viette, and especially Dinwar’s comment about Boss’ motivation being “bardic tradition”. I don’t know why he does it…I don’t have any reason to think it’s malicious… and I think Marvin the Paranoid Android summed it up well, “All that to say, I doubt he is conscious of doing this. He’s delivering the emotional truth of how he perceives the events.” it’s just so Extra.

I’ve been permanent in this job for over a year now, and this is the best job in the best place I’ve worked. While, like every workplace, there are conflicts, they are handled maturely and well. I feel like I belong here.

My communication skills have improved, I’ve been challenged and not chided and I have taken on extra roles and responsibilities that I am enjoying.

Working in healthcare is super stressful, we’ve gone from heroes to being harassed on our way to work, but I love the people I work with and I finally feel like I’m working where I need to be and I’m living in a place I need to be.

Even if it’s expensive.