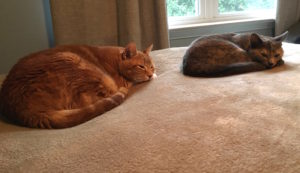 Please observe the size differential. These are both full-grown cats.