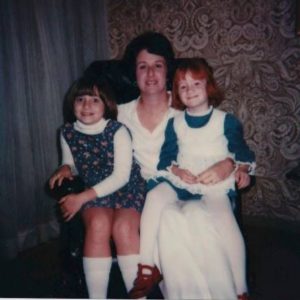 A few years ago, I wrote up some things about my dad, on what would have been his 71st birthday.

My other parent is still here, thankfully, and so for Mother’s Day, here are some things about my mom:

* She is an extrovert’s extrovert, but somehow ended up with two introverted daughters. She makes up for this by talking to random strangers as much as possible when we are out in public. Whenever she travels (which is frequent), she comes back with detailed stories about the lives of all the strangers she met.

* Her need to talk is so strong that she once called me from the woods during a silent yoga retreat.

* She thinks that yoga is the cure for all ills. Whenever I get sick — even if it’s just a cold — she tells me I need to do yoga. When I once pointed out that she’d had the exact same cold as me a few weeks earlier, despite daily yoga, she denied ever getting a cold and changed the subject.

* Some of my happiest childhood memories are of watching “Dallas” with her and heatedly discussing JR Ewing and Cliff Barnes. In retrospect, it wasn’t an appropriate show for an eight-year-old, but it was our Friday night thing and we were super into it. We were also heavily into Benson.

* She becomes a superhero when someone is ill or injured. She was never an especially demonstrably affectionate mom — she is too no-nonsense for that — but when you are sick, she tends to you like you are a baby kitten.

* Years after divorcing my dad in a not especially amicable split, she was sometimes found driving him to chemotherapy appointments.

* When I was about 12, I told her that I figured adults stopped having sex around 26 years old, because after that point they’d be too old and gross. About a decade later, when my then-boyfriend turned 26, she sent him a sympathy card. She is still immensely pleased with herself for this.

* She was once convinced she had shingles and was Very Upset about it, but it turned out to be a bug bite.

* She’s normally very careful not to give me unsolicited advice (I think as a reaction to having parents who gave her waaayyyy too much), but every once in a while she feels strongly about something and swoops in to tell me to do something. She’s nearly always right (aside from the yoga). Most of the really excellent advice I’ve received in my life has come from her.

* Things she has never pressured me to do: get married, have a wedding, have kids. Things she did pressure me to do: buy property, invest money, return library books.

* She is an excellent grandmother. She is constantly flying across the country to see my nieces, who love her.

* She likes to cook extravagant things, like a baked Alaska, just to see if she can, but she’s also unflappable about food issues. When I went vegan in my 20s and my vegan friends all had families who were varying degrees of unsupportive, my mom calmly started holding vegan Thanksgiving dinners. When my sister went kosher, my mom found kosher stores and restaurants. When my sister’s diet then got really complicated for medical reasons, my mom learned the 500 new rules my sister had to follow, hunted down obscure ingredients and recipes, made sure they were all kosher on top of it, and to this day calmly juggles myriad people’s varying dietary preferences without seeming in the least put out. I think she actually likes it.

* She taught me to speak up when something is wrong in the world — whether it’s an unjust law or a silly company policy — and she has always supported me in doing that, even when she didn’t like what I said.

* She isn’t one to tell you she loves you, but if you pay attention, she’s saying it.