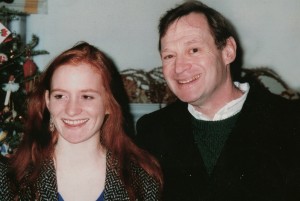 This is me and my dad, Steve Green.

Here are some things about my dad:

* He worked as a journalist for 40 years, covering Congress and national security, among other things. After he died, Senator Barbara Boxer gave a really nice tribute to him on the Senate floor. This is part of what she said: “I got to know Steve as he kept a watchful eye on Congress for the Copley News Service and the San Diego Union-Tribune. He had a quick wit, a keen intellect and a great nose for a story. Above all, he was scrupulously fair in his reporting. And he believed that as a journalist it was his role in life to help this country realize its tremendous potential … With a wink, Steve could puncture the biggest ego. He had the uncanny ability to be skeptical without being cynical. He cared for the people he covered without coddling them. He followed serious issues without losing his sense of humor.”

* Despite this noble portrait, he also gave people the finger at inappropriate times.

* And he once hit his Hebrew school teacher when she attempted to stop him from leaving a school picnic. And remained proud of it as an adult.

* He never gave up trying to get me to read Treasure Island and David Copperfield.

* He once tried to get out of a dinner invitation a month in advance by telling the person that he had to walk his dog that night. He didn’t see why I thought this was a bad excuse.

* He was working at The Washington Post during the Watergate break-in, and his editor called him to cover the story. But he was out playing basketball, so the editor called Carl Bernstein instead. True story.

* He loved family gossip. Even at his sickest, he’d call me up and ask, “Do you have any good gossip?” He reveled in a good scandal. Here is something that one of his former editors, Barbara Cochran, said about him in his obituary:  “When he had a good story going, he would get this grin on his face — when he felt he had the goods.” This is the same grin he would get when he got ahold of some family gossip.

* In the last year before he died, he couldn’t eat much — literally couldn’t, because his esophagus had been removed and replaced with a shoddy replica that didn’t tolerate food well; he could only have liquids, and even soup was often too solid for him. Yet occasionally he would pull a chocolate bar of mysterious origins from his bathrobe pocket and eat it without any problems — I assume due to sheer force of will. 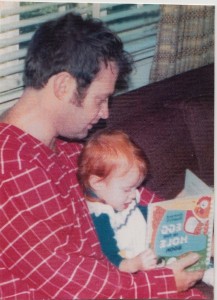 * He hated that I worked for nonprofits and thought I wouldn’t make enough money. He desperately wanted me to change career paths, but when anyone asked him about it, he’d bite his tongue and say, “We raised Alison to stand up for what she believes in.” Then he would secretly send me job ads he’d clipped from the paper and suggest that I go work in PR.

My dad died when I was 27, so he didn’t get to see me publish a book or buy a house or write this blog or do any of the other things I’m doing now. He would have really liked it.

Sometimes I’ll see a man who sort of looks like him from the back — always in grocery stores, for some reason — and I’ll let myself pretend it’s him for a minute. But it never is.