I am a department head for a medium-sized nonprofit. I have eight direct reports and I report directly to the CEO. I am at my wit’s end with one of my reports who needs constant validation to the point of obsession and disruption of my own ability to work and direct my department.

I have been this person’s manager for almost two years. I thought once he knew he could trust me, he’d let up on this all-consuming need for reassurance that I won’t scream at, discipline, or fire him. Multiple times per day, he asks if he’s doing a good job. He insists on finding me to dissect every single customer interaction he has, because he believes every customer who is less than joyous will demand I fire him. If he makes a mistake, he apologizes over and over for several days and sometimes weeks, occasionally via voicemail after hours. He will often interrupt conversations I’m having with other coworkers to do this. When I try to help him correct the mistake, the apology flood starts up again. If someone else makes a mistake, he assumes it was really him and the apology flood starts. If I am frustrated with literally anything, from managerial issues to an unsatisfying lunch, he assumes I’m angry with him and again — apology flood. If he sees me talking to other managers or the CEO, he needs to know if I was talking about him. Teaching him new tasks is nearly impossible because correcting him sets off the apology flood. I cannot pay him a compliment without him saying something about his parents never saying nice things to him.

Last week, he asked if I still felt he was as good an employee as I did when I promoted him to a full-time position a year ago (his quality of work is very good). I am exhausted and becoming uncomfortable. And if anything, this neediness has gotten worse over time, despite me promoting him, consistently calling out his accomplishments, never yelling, asking him to trust me, and telling him he doesn’t need to tell me about every customer interaction.

There are some underlying issues outside of his control that are not my things to tell even anonymously, but this isn’t sustainable and I cannot be his therapist even if I were qualified. How do I tell him this has to stop right now without setting off all of the above actions? My boss is aware of the issue, but only peripherally, and he is very hands-off about how his managers manage.

Oh my goodness. This sounds awful for him and awful for you. More awful for him, probably, but it’s pretty unworkable either way.

I wouldn’t be surprised, too, if this is playing out in similar ways with his colleagues. Assuming you’re not the only one receiving these apology floods, it’s likely affecting his coworkers’ work lives too, and may be keeping people from working with him. For example, are people hesitating to ask him routine work questions or reluctant to give him feedback on a project because they’ve learned to dread the reaction they get? The impact on you on its own is reason enough to address the situation, but the likely impact on others is impetus too.

It does sound like there are some mental health struggles here, but you’re right that you can’t be his therapist. And as sympathetic as you might be to what he’s dealing with, you’re right to be concerned about how disruptive this is. It’s also asking a huge amount of emotional labor from you (and probably others).

I thought this would be a interesting one to consult with an actual therapist on, so I talked with clinical psychologist Andrea Bonior, who for 15 years wrote the mental health advice column “Baggage Check” for the Washington Post and is the author of the book Detox Your Thoughts, which uses clinical stories and personal examples to illustrate the mental traps that are most associated with unhappiness. She kindly agreed to weigh in on this letter, so I’ll let her take it from here: 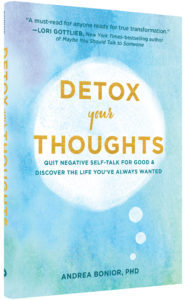 I can only imagine how much distress this guy goes through every single day. It makes my head spin, and I also can only wish that he would get some help. You mentioned the underlying issues outside of this control that are clearly significant, and as a therapist it’s impossible for me not to hear screeching alarm bells that if he doesn’t work on these things soon, he will end up sabotaging himself at work irreversibly. My guess is that it’s already doing a number on his personal life, which probably creates a vicious cycle in terms of his self-doubt. My heart aches for him.

But he is not the one writing in; you are, and I empathize with how difficult this is for you as well. And you’re right—you certainly can’t be his therapist, and your role in urging him to make an appointment (despite the fact that one would be helpful like, yesterday!) gets tricky as well.

Explain how his need for reassurance is slowing down productivity, creating extra work, making him less autonomous and self-reliant, and undermining his otherwise solid output. Try to depersonalize it as much as possible; make it not about his anxiety or his personality, but about the quantifiable actions that detract from the work. Enumerate examples not by sounding like you’re a prosecuting attorney, but by giving him very clear particulars to understand that he needs to take action on changing. If you need a starting point, here’s a basic sample script:

“It’s time that we had a conversation about something that is getting in the way of your doing your best work. As I have conveyed to you many times, the quality of your work has generally been very good. We are at a point, however, where you check in with me about your performance with such frequency that—ironically—it is detracting from your work, and mine as well. Yesterday, for example, you did it three different times. I know this may be hard for you to hear, but I need you to take it seriously. I am concerned that you are sabotaging your own performance by constantly checking in with me, apologizing too much, and requiring me to reassure you on a daily basis. This pattern is a real problem, and it’s no longer possible for me to sustain my role in it. It doesn’t seem helpful to you either. I want to support you in any way I can, and breaking this cycle is a crucial part of that, for the good of all of our work. Can we have a real conversation about how to chart a new course here?”

It’s very likely that he will be horrified by this, and begin his apology flood anew. But you can gently use that as its own example. “I feel like you are doing right now what I am trying to talk to you about. An important part of work performance, day to day, is being able to take feedback and act on it constructively to move forward. I feel like you get stuck in it, like right now, and it obscures the solution. I want to help you in this before it does permanent damage.”

As meta as the whole doubts-about-job-performance-are-affecting-job-performance thing is, at some point it should be like any feedback at work. Document that you gave it, set actionable goals for him to work on, and check in with him about his progress. If it’s something that he just can’t bring himself to make inroads on changing, then, sadly, it’s like any other employee bringing down the ship with their own dysfunction. Ultimately, if he were to lose his job for this and you made it clear that was the reason, maybe it might finally motivate him to seek the support that he deserves.

I think this is excellent. Be kind, be empathetic, but be clear that what’s happening now can’t continue, ask how to chart a new course, and support him as you can. Then you need to hold him to that like you would any other performance expectation, but by setting clear expectations and boundaries, you’ll give all of you the best possible chance of a good outcome.