I have been interviewing for an junior level position at a nonprofit for the last two weeks. I was excited when I saw a third interview invitation this week, only to discover that the interviewer had sent a scheduling tool that showed all the interview slots available and what other candidates were already booked. Not only could I see that there are seven other candidates also getting a third interview, but I was able to see their full names and times they selected as well. 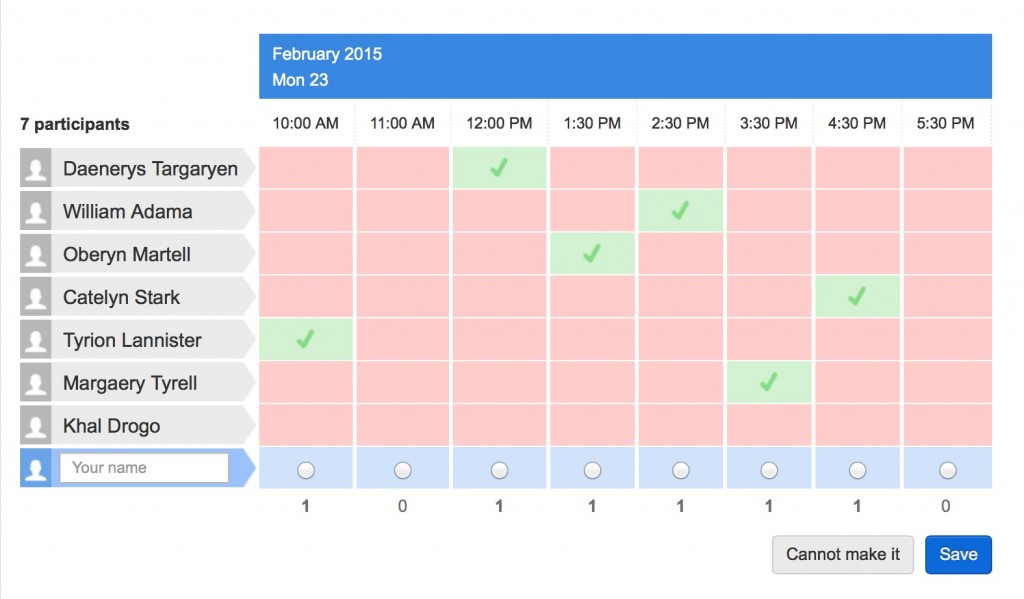 The letter-writer sent me a screenshot of the scheduling form that looked like this. I’ve changed the names for anonymity.

Originally I was going to write an email stating how uncomfortable this situation has made me, especially since I would be missing work for the third time for a job I probably won’t get. However, I did manage to get my first time request (after work hours) so I decided to hold back on my email since I don’t wish to hurt my chances.

Is this highly unusual for a company or organization to do? I want to ask my prospective employee if it is traditional for them to disclose names to job candidates, because if it is, I am not sure if I want to work for this organization if that is common hiring practice. I have a small gut feeling that the guy who sent this (a young fresh out of college grad) had no idea that this was a bad idea, and just thought it would make things easier for him. (He’s not the manager I’d report to if hired, but someone I would work very closely with day to day.)

Should I let his boss know when I interview with her this week that it made me uncomfortable? Or should I let it go in case it hurts my chances? Also, eight candidates for a third interview?

It’s definitely not typical to share candidates’ names with other candidates. It’s supposed to be understood that there’s a certain confidentiality in hiring; you don’t go sending the names of the other candidates all over the place. What if you’d known one of the people on the list? What if you were unethical and used the information to somehow hurt their chances or out their job search to their current employer?

I think it’s likely that this isn’t an organization-wide practice, but rather just this one guy, who thinks that he’s found a way to add efficiency to the process, without realizing that there’s a reason employers don’t do this. If he doesn’t have much work experience yet, he could easily just not fully realize the wider implications for this kind of thing (and there’s a good chance he’d be mortified once it was pointed out).

As for whether to say something to his boss when you interview with her … I wouldn’t at this stage. It’s done and can’t be undone at this point, and having an uncomfortable conversation about it carries the potential of hurting your candidacy (even if only unconsciously on your interviewer’s side). But certainly if you get an offer, it would be reasonable to ask about it. You could say something like: “Could I ask you a question about something in the hiring process? I noticed that when scheduling the third interview round, Jarvis sent each candidate a scheduling sheet that contained the names of seven other candidates who were also interviewing. I felt a little uneasy having that shared outside your organization, since I’m being discreet about interviewing and imagine others are too.”

You want to say this nicely, and with some understanding that it was likely just a rookie mistake. But the response might give you a better feel for how the organization operates, and how they handle having mistakes pointed out. (And if nothing else, it will alert them that this isn’t great to do.)

As for having eight candidates for a third-round interview: It’s absolutely a lot for a late stage. By a third in-person interview, they should have narrowed down their pool of finalists. That said, I don’t know that you can conclude for sure that there are eight candidates left at this stage. Those other names you saw could be interviewing for other positions. Hell, they could be other meetings that he’s scheduling that aren’t interviews at all. It’s hard to say, but I’d be hesitant to draw conclusions from it.