An employee I manage called out today due to being hospitalized over the weekend for alcohol poisoning. The employee went out to celebrate their birthday over the weekend and overdid it on the partying. I realize this is out of work conduct; however, it is affecting the employee’s job because they called in to work. Do I have a leg to stand on if I have a serious conversation with the employee about their judgment and how this type of behavior could negatively effect their employment with our company?

If it just happened once, leave it alone. People are human and make mistakes, and until there’s evidence that this is part of a pattern, there’s no reason to assume that this person hasn’t learned their lesson (or even that there’s more to the story that you don’t know). I mean, the person ended up hospitalized. They probably realize it’s a big deal.

When someone makes a mistake and it’s clear to them that it’s a mistake and they’re already set on not repeating it in the future, there’s no need to lecture them about it. (The exception to this would be if the work day they missed as a result was particularly crucial – – like if they were supposed to be presenting at an important client meeting that day, in which case, yes, a serious conversation would be warranted.)

2. Can I record work meetings to help with my ADHD?

Your blog has been super helpful to me throughout the years and your interview advice helped me land a great job after college! I have been in this job for almost a year now but there is something that is bothering me. I have diagnosed ADD and it sometimes affects my recall/memory. In high school and college, with permission from teachers and approved accommodations, I would record my classes while taking notes, and I could listen to the recording to make sure I did not forget to write something down. I was wondering if it would be okay for me to ask if I could do something similar in group meetings? I actively take notes but sometimes I don’t write fast enough or stop to listen more closely to a colleague and miss some stuff. Generally in classes I just set my iPhone to airplane mode and then clicked record so it was very discreet, but I’m not sure if even asking for this would make me look unprofessional or if it’s just not a thing that can be asked for the workplace.

There’s a much higher barrier to asking to record at work. People often don’t want work conversations recorded for a variety of meetings, and simply the act of recording can change what people are willing to say. (I don’t mean that otherwise they’d be freely making illegally discriminatory comments and such; I just mean that recording can inhibit people’s willingness to speak as candidly as they otherwise would about clients, projects, etc. It can even inhibit things like brainstorming, if people are nervous about having a potentially silly idea captured forever.) Your manager also may worry that if you’re playing back meetings afterwards to make sure you didn’t miss anything, you’re doubling the amount of time you spend in meetings.

I’d explore other options instead, if possible.

3. Interviewer kept asking why I wanted to work there, then hung up on me

She said, “No, why do you want to work here?” I was confused, but I rerouted and told her I knew someone with the company who was really happy there, and that I was interested in a company with a positive work culture and a focus on teamwork and collaboration, etc.

She said, “No. Why do you want to work here?” I paused, completely at a loss, and then she said, “Hello?” and then hung up on me.

My questions are:
1. What gives?
2. How am I supposed to answer this question if both of these answers were wrong?

She’s a jerk. You gave a completely normal answer to her question, and if she wanted something different, she should have been more specific in her wording. Repeating the same question three times with zero variation is wording is a jerk move — it was clear you weren’t taking from the question what she apparently wanted, so she should have reworded it.

Also, insisting on a more nuanced answer to just a general question is eye-rolly. You’re at the phone interview stage, which means you’re early in the process. It’s really unlikely that you know enough at this stage to give more than a general answer. And frankly, you probably don’t know enough this early on to know if you really do want to work there at all.

And then she hung up on you, as the cherry on her snotty little sundae.

She’s a jerk. Let your friend who works there know what happened.

4. How can I admit defeat on a challenging project?

A few months ago, I volunteered for a project at work that I thought would be relatively simple. As it turns out, it’s not simple. It requires a degree of technical knowledge that I don’t have (and that I never claimed to have), and is a more sprawling project with more factors involved than were initially represented to me. I’ve done what I can to get myself up to speed on the work, including asking coworkers with more expertise for help and attending a training that ended up covering very little of what I needed to know. I’ve been told that others have completed similar projects by “just googling a bunch of stuff” (their words) and have the impression that my coworkers think the job should be easy. I’m starting to worry — and I know that this sounds silly and self-pitying — that I’m just not smart enough to do this. I’m also struggling to get the rest of my work done because I’ve had to spend so much time on one project.

I know I’m at the point where I need to ask to be taken off the project, but I want to do so without giving any of my coworkers or my manager the impression that I’m lazy, unskilled, or unintelligent. One coworker in particular is hard to please and has been critical of my abilities and time management both in conversation with me and with others while I wasn’t there (I’ve heard about these incidences secondhand). She’s in a more senior (team lead) role above me, and I’m concerned that getting even more on her bad side will have negative repercussions for me. I feel like I can’t win at this point — either I have to keep working on a project that I just can’t do well and that I dislike working on, or I hurt my professional credibility.

First, are you sure that you’re envisioning the same end results as your manager is? It’s possible that she’s envisioning a much more basic version of the work, so if you haven’t already talked that through with her, do that first. (For example, you’re thinking you have to hand-code an entire website from scratch, and she’s thinking you’ll throw up a single WordPress page and be done with it.)

But if you’re sure that’s not the case, are you able to pinpoint the type of technical knowledge that’s needed for the work (and that you don’t have) and the additional factors that make this more complex that it seemed at the start? Get really clear on those things and then say something like this to your manager: “I’ve been really digging into the X project to figure out what it’ll take to do it well. I’ve done a lot of research on my own, talked to people with more expertise, and attending a training on X. It’s more complex than it initially looked because of (factors) and as I’ve dug in, I’ve realized that we need someone with real expertise in Y to achieve what we want to achieve with this. At this point I’m confident that I’m not the right person to spearhead it, and I think we need to transition it to someone with expertise in ____.” (If you have suggestions on who that could be, insert them here. That could mean contracting with an outside vendor if you think that’s the right approach.)

There’s no guarantee here that your critical coworker won’t blame you for this, but if the choices are doing a poor job on a project or being up-front that you’re not well suited for it, go with the latter. (It also helps that you volunteered for this, rather than it being assigned to you. You could still take this approach if it had been assigned, but it makes it easier that it wasn’t.)

5. What’s up with this terrible assessment test? 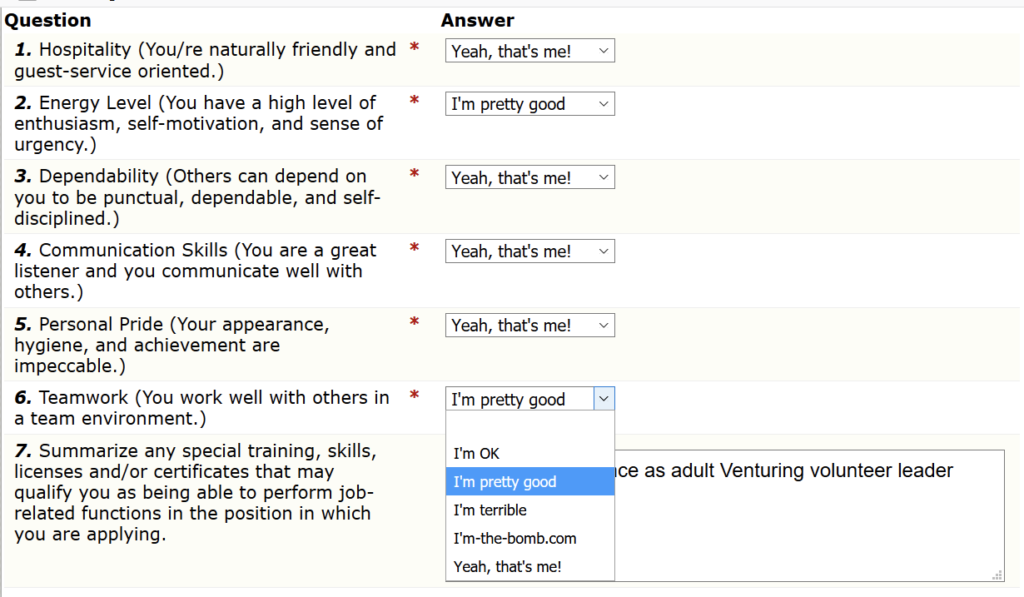 I came across this while applying for a second job. The full options list:
I’m OK
I’m pretty good
I’m terrible
I’m-the-bomb . com
Yeah that’s me!

Where Is “I’m the bomb” on this “scale”? I *think* it is meant as a strong positive–but being right below Terrible, I am not so sure. These are for things like Hospitality, Teamwork, etc.

Is this just weird, (meant to be) cool-sounding, and/or “useless tool for folks who don’t know how to hire”?

Useless tool for folks who don’t know how to hire.

Self-assessments are notoriously inaccurate. Everyone has a different idea of what “okay” versus “pretty good” means, and loads of people think they’re great at Skill X when they’re not. That’s before we even get into “I’m the bomb” on this scale (with the trying-way-too-hard .com).