1. Is my workplace toxic or am I just inexperienced?

I came into my first job excited and idealistic, believing everyone wanted to improve the company and work towards the same goal. I was given some warnings prior to starting that my position had high turnover, but I initially couldn’t figure out why. It slowly became clear that my boss only listened to the opinions of one employee. That employee was friends with the boss at a previous job, and is close with the two directors who are directly below the boss. This employee is deemed untrustworthy by her peers, as she tends to monitor our work and report anything she finds disagreeable. This concerns my position because she is my partner in my team and we work closely together as peers. Other employees warned me of the partial treatment and recommended I keep my head down and appease this employee as much as possible. I did this for as long as I could, until she started threatening to tell my boss if I didn’t agree with her or do what she wanted and the work environment started to feel unsafe.

When her treatment finally became abusive and discriminatory (yelling, saying racist things, spreading rumors about me), I reported the treatment to HR. HR performed mediation and approved my request to sit in a separate office, but my relationship to management has not been the same. I was previously viewed positively, but after standing my ground, I could never do right again. My boss started yelling at me, falsely accusing me of things. HR had to get involved, and he was forced to apologize to me. He gave me a written warning which I found unreasonable and I requested a second opinion. That person agreed it was overreactive and could’ve been easily dealt with with some coaching. He wasn’t pleased with that either and recommended I leave my job if I didn’t like the treatment (I’ve had to stay for personal reasons).

Luckily his boss saw how he was treating me and demanded that all his conversations with me be mediated by her. She ultimately stepped in and requested that I nominate a mentor who could advise me and also be present in my meetings with the boss. This was immensely useful, and my boss ultimately ended up hearing my side (albeit begrudgingly when my nominated mentor spoke up for me). My boss abruptly left a few weeks later.

Work has never been the same for me since. I am now scared of punitive treatment every time I am called to a meeting, even though my new boss is reasonable and fair. Is my workplace toxic or am I just inexperienced with how to handle workplace situations? Should I have just put my head down, been agreeable, and kept a low profile?

No! This is about your workplace, not you. It’s not just your ex-boss or that favored coworker; it sounds like everyone there has learned to tolerate a level of dysfunction that they shouldn’t. When an employee is yelling at a colleague and saying racist things to them, HR shouldn’t be mediating; they should be shutting down that behavior firmly and with finality. When your boss’s boss saw how he was treating you, it’s good that she intervened, but that should have involved laying down the law with him immediately, not just having someone sit in all your meetings with him. (That said, if his abrupt departure was the result of her firing him, then she did do the right thing, and the chaperon might have been her mitigating things for you until she could act, if the organization’s processes made a speedier resolution impossible.)

You might be inexperienced, but it sounds like you handled all of this well and your instincts were good. Now you’re dealing with the emotional reverberations of having worked for such an awful manager, which is very normal. This may help with that.

2. I don’t want my coworkers to keep hugging me

I started a new job in hospitality around a month ago. My coworkers (managers included) are all very close (as they have all worked together for at least a year) and often show affection by hugging. I am not comfortable with this but I haven’t said anything because I’m scared about offending them or causing a rift in the workplace.

What can I do to stop this? And how can I make sure I don’t offend them?

The words you want are: “Oh, I’m not a hugger!” You might need to put up a hand as a physical sign as well so they see it before they’ve already gone in for the embrace (not with a fully outstretched arm like you’re stopping traffic, but closer to your body). But even if they’re already hugging you by the time they hear the words, they’ll hopefully remember for next time.

I know it might feel strange to say you’re not a hugger after you’ve been hugging them, but it shouldn’t be that big of a deal. Most people will realize that you only just now felt comfortable saying it, not that you suddenly developed a new aversion to them.

This shouldn’t offend anyone or cause a rift! Some people are huggers, and some people are not. Make a point of being warm with them in other ways (greet them warmly, take an interest in them as people, engage where you can) and it should be fine.

3. I’m losing out on money because I got a raise

When I accepted my position over two years ago, I reported to a manager, who reported to our director. After six months, the manager resigned, and the director used that position to fill another role in our group. I ended up being assigned all of the former manager’s responsibilities, which included leading two massive projects with tight deadlines.

My director, to whom I now report, has been promising me a raise the entire time. In August, he finally came through and excitedly told me the merit pay would be retroactive to the beginning of July. Not great considering how long I’d had additional responsibilities, but they usually don’t allow any sort of retroactive pay.

Last week, our CEO announced that everyone would be getting a pretty large one-time bonus. However, anyone who received a raise from January 1 to July 1 is ineligible. That lump sum payment is significantly more than what my raise will yield in a YEAR.

I feel ungrateful for being upset, but I honestly think they granted my retroactive pay as a money-saving tactic. It’s worth noting that this is the only time our company has provided a bonus, and my raise was lower than expected. Should I say anything to my director during our next check-in?

Yes. I wouldn’t even necessarily wait for your next check-in unless it’s in the next few days; if it’s not, schedule a separate meeting (both because it’s time-sensitive and to underscore the importance). Point out that you are losing money through the raise, after already not being paid for the higher level of work for the last … 18 months? Say, “I’m sure the company’s intention is not for me to lose money through this raise, so I’d like to ask that it be corrected.”

4. Someone put scales by our vending machines 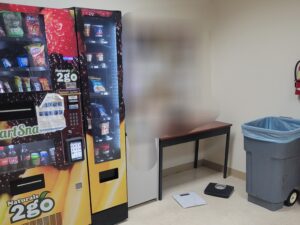 I was at our office’s main building today for a multi day training, and noticed these fun additions next to the vending machines!

BRB,
Gonna go burn it all down. (Figuratively.)

There is zero reason anyone needs to weigh themselves at work (as opposed to at home if they choose to). And if for some reason they did feel the need to do it at work, they could do that privately. Putting two scales next to the vending machine sends a message and that message is a problem.

5. Asking to go part-time as a new employee

I was recently hired into a new full-time role shortly after having a baby. I quickly realized that although I like the team and the work, I want to spend more time with my children. I am considering quitting altogether. However, I’m already getting very positive feedback in my new role, and the company seems to really need people. Is it worth asking to drop to part-time?

Yes! If you’re going to leave otherwise but would be willing to stay part-time — and so their choice is none of your time or some of it — it absolutely makes sense to ask. (That assumes that you’d want to go part-time, of course. If you’d rather just leave entirely, do that instead — don’t give them hours just because they need people.)