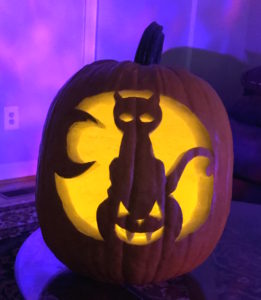 Did you ever work somewhere haunted? Feel the ghost of your predecessor marooned in your office? Encounter an evil spirit lurking in the copier?

A couple of years ago for Halloween, I asked people to share stories of spooky moments at work. There have been calls to do it again, so let’s go for it — share in the comments.

And to start us off, here are some particularly creepy stories from last time:

“At my last job I would often work several hours past the others, and past dark. There were multiple times where I’d hear filing cabinets opening downstairs, hear the printer randomly turn on and start whirring, and voices whispering. Sometimes the door would be unlocked when I was sure I’d locked it. Every time I thought someone else had come back for something and every time, it was dark and silent when I got downstairs to look. The voices were the worst. When you work in an industrial park you don’t expect to hear talking from outside after hours. Place was in the middle of nowhere.

Of course you could make an argument for stress. I sat at the top of the stairs in a creaky old building with my back to the stairwell, and I was overworked and tired. That said, my boss/the owner DID die in a tragic and unexplained plane crash a couple months before.”

“I work in a museum. There has always been a joke that the man the museum was named after haunted the place. Things would go missing and items in the souvenir shop would be moved. … When Housekeeping did a deep clean at night, they always said strange stuff would happen. Sounds, voices, etc.

When the museum was renovated, we added a big-screen theater. There is a control booth with a small storage area at the top of the theater steps. There is also a tiny balcony behind the control booth where we have screens that face the main hall and that we use to advertise upcoming events, memberships, etc. Many of the security staff swear they have seen and/or experienced ghostly happenings in the control booth/storage area/balcony. One really large, muscled ex-military guy had such a frightening experience that he refused to go in the theater. He was on rounds, checked the theater and heard sounds in the control booth. He knew the AV guy was off that day so he went up. He saw no one in the booth or the storage area, so he was checking the balcony area. He said someone shoved him and he almost fell off the balcony area. There was no one in the theater besides him but they checked the tape anyway. You could clearly see the moment he was pushed forward but you couldn’t see what pushed him forward.

I stay away from the theater. If the biggest security guard in the place was almost pushed off the balcony by invisible forces, I’m not chancing it.”

“I work in a nursing home with many folks who have dementia. They live in other realities, and I’m used to residents saying weird things. However, there seems to be a trend in one area of the building where residents typically refer to ‘the little boy’ who always seems to be standing somewhere near. It’s very common for a resident to be talking to the little boy (look like they’re talking to thin air), and it’s also common for them to ask us questions about the boy (‘is this your child?’ or ‘is the little boy going to come to the activity too?’, etc.). It’s only in that one area of the building, but it’s with almost all of the residents who have dementia. Only one of them has a history of having visual hallucinations. It does creep me out a little bit.”

“My old office was haunted. It was in an industrial park built on the site of a torn-down hospital, and it had a general spooky vibe after dark that we all felt, but rarely talked about. I was always staying late to meet crazy deadlines, and after midnight the activity would perk up. Mostly whispers, sounds of doors down the hall opening and closing, and a general being watched feeling. I put up with it for a few years until one night in 2006.

I was working crazy hard on a federal grant that was due tomorrow. I started hearing the typical spooky noises – whispers, bangs, doors – so I turned up the music in my office and basically said ‘%&$* you, I have to finish this. Leave me alone.’ That was the only time I ever addressed the energy/entity/thing directly, which was probably a mistake. At about 1:30 a.m. I got the tingly being-watched feeling. As I was typing I felt something cold grab the middle of my right forearm and I heard something say ‘get out’ in my right ear – it sounded like someone speaking normal volume, standing 6 inches away. I jerked out of my chair, grabbed my bag and booked it to the lobby where I set the alarm and then ran as fast as I could to my car.

Because I wasn’t finished and was panicking about my deadline, I woke up and got to the office very early – around 5:30 a.m. I walked in the lobby, turned off the alarm, and walked into my office and froze. Every drawer of my desk was open. My trash can was knocked over and trash was spread all over the floor. My chair was out in the hallway. All the cabinets of the credenza behind my desk – which i have never even used – were open. My keyboard was knocked onto the floor.

Mine was the only office messed with. I checked the alarm detail and no one came in or out that night other than me. None of us could explain it. I never worked past 10pm in that office again.”

“I worked at a place where when we renovated our office, they decided to replace all the walls with glass, to show we were a ‘transparent organization’ (as you can probably guess, leadership there kind of sucked). While the higher ups had frosted glass offices, most of the staff had glass, fishbowl offices with no doors. As you can imagine, we all hated when we lost our walls, particularly one guy who routinely complained about it.

Well, a few months later this guy is fired (for unrelated reasons) in the worst way possible, where they did it midmorning, and everyone saw it happen (hard to hide things in a glass office). So he had to pack up all of his stuff and was escorted from the building.

The next day, the glass walls of the fired guy’s office shattered. No one was near that office, no one saw anything suspicious, and we worked in a secure office so people couldn’t come in without us knowing. We never found out what happened, but I like to think that fired guy got his revenge.”