I’m a new manager at a small advertising start-up that has a very open and transparent culture. I actively encourage my team to challenge and disagree with me, but I’m having issues with one of them doing so in a way that I perceive as disrespectful. He frequently disagrees with me, which is fine, but he does so in a way that I think challenges my authority.

For example, if I explain a standard procedure that we’ve agreed upon and done in the past that he doesn’t remember, he’ll bluntly state “no, we’ve never done it that way” in front of the rest of the team. This has sometimes lead to us going back and forth about whether or not a fact is a fact, even when I have records or documentation that prove I am correct, because he can’t accept the possibility that he might be wrong. Gender may be part of the issue here: I’m a woman, he may not be super excited about having me as a manager. But I’m trying to figure out the best way to handle this without going too far into that.

So far, I’ve mostly been trying to ignore him when he does this: to briefly explain the facts and reference the documentation and move on, rather than to sink to his level and have it escalate to me reprimanding him. I’m not sure at what point this calls for some kind of intervention, though. Does it make me look weaker to ask him to disagree with me more respectfully in front of the rest of the team? And, how do I ask him to cut it out without also discouraging the rest of the team from being open with me? For context, I was promoted from the same position he is in now, so I do have expertise in our procedures; this isn’t just an instance of him actually being more familiar with the role than me.

I’d get it out of the group meetings first — so as soon as it starts to go back and forth, you should say, “I don’t want to derail the meeting on this, so you and I can talk about this one-on-one sometime this week.”

Then when you talk with him one-on-one, you can say, “I’ve noticed this keeps happening — I say X, you say ‘no, it’s Y,’ and then it turns out that yes, it was X. Given the frequency, it’s starting to come across as adversarial, and even as resistance to my leadership of the team, and it’s derailing our meetings with others. What’s going on?”

2. Can I fly business class while my boss is in coach?

Our company policy allows for business class flights when the flight is longer than three hours. I am going on an upcoming trip with my boss to a client’s located. I have previously flown business by myself to this client, but this will be the first time flying with my boss. My boss sent me his itinerary and I saw that he booked economy. I am erring on the side of also booking economy, but the policy does permit business class (flight is six hours). Any thoughts?

Yeah, you do not want to be flying business class while your boss is on the same plane in coach. Unfortunately, you’ve got to follow your boss’s lead on this kind of thing when you’re on the same trip — just like if you went out to dinner together for an expensed meal, you wouldn’t order a bottle of wine, appetizer, entree, and dessert while he was just getting soup.

In theory, you could say to him, “I noticed you booked coach. I’d always thought business class was fine when the flight is over three hours — but do you typically prefer that we fly coach?” And who knows, maybe that would reveal that his booking is wrong, or that this client is extra budget-conscious, or something else about his reasoning. But the (very high) risk there is that he’ll say something that then makes you feel obligated to fly coach on all future flights on your own … so you’re probably better off just saying nothing and following his lead this time.

3. I care for plants, and people think it’s easy

I take care of plants in offices (and more). My company provides the plants, containers, and care. My job is to keep the plants healthy, looking good, and pest-free, as well as maintaining good relationships with clients. I have a lot of accounts, and take care of hundreds of plants. I also have responsibilities at our office and greenhouse. I really enjoy my job and am happy to be in the field I am in.

What do I say to people who tell me my job has no stress and is easy? My job is challenging, physical, requires critical thinking, and involves taking care of living things! The implication is, I feel, that I don’t have any special skills and that I just float from plant to plant with an empty head. My job garners a lot of comments from the peanut gallery, which I usually brush off, but sometimes it feels very frustrating to not be treated as a professional. These comments come from people who aren’t directly involved in my work (they have no contact with the company) and who I may or may not recognize. In a big office, I know that I am seen by many people, but I don’t know everyone.

If you can, try reframing those comments in your head so you hear them as “I’d love to be able to spend my day taking care of living things and not sitting in stuffy conference rooms with a cranky client who wants to debate comma placement.” I do think that’s what most people intend to convey — they’re having an escapist fantasy that may or may not reflect the reality of your job, but does reflect their stress/frustration/discontent/burn-out with their own. (I have to admit that when I read your letter, I had that same reaction — “that sounds great!”) Or people are just making conversation without realizing how what they’re saying is coming across.

A good response to those comments is simply, “I love my work!”

4. Can I tell people I won’t hire friends?

I’ve learned the hard way that hiring friends is a bad idea, as it can easily lead to the end of the friendship and the end of the professional relationship at the same time. What I’m wondering is whether it’s okay to explicitly discourage people from applying up-front because they’re friends with you, they go to the same church as you, or are sufficiently involved in a shared community that it could make things very uncomfortable if the professional relationship ended badly. If a friend applies for a job opening and does not get an interview, is it okay to simply tell them that you don’t hire friends as a practice, or is that something that it’s okay to think but not to say?

You can absolutely say it! In fact, it’s a good idea to say it, so that you short-circuit the whole thing now rather than dealing with what to do if they apply. A good way to say it is, “I’ve seen that ruin too many friendships, so I have a policy now that I never hire friends.” If anyone pushes (“we could handle it!” “I’m sure it would be fine!”), you can say, “It really is a firm policy. I don’t want to risk our good relationship. Thanks for understanding!”

After reading so many times about the struggle in getting people to put their items in the dishwasher, I wanted to share what has been a very successful solution.

I was so tired of putting other people’s dirty mugs in the dishwasher. No amount of chiding, chastising, joshing, reminders, or even a sign next to the sink with a red arrow pointing to the dishwasher did the trick.

And then it came to me. Use a Sharpie and write in the sink itself. So I did. And it has worked beautifully. People laughed, and then did as asked. The writing fades when the sink is scrubbed, and is easily redone. The second time, I made a red arrow. It might not work in every office, but it’s worked in this one. 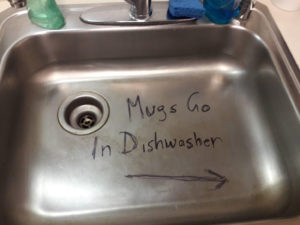