I’m currently in the super fun (not) process of job hunting after university. I’m in the UK and am using a number of different hiring websites. I’ve applied to a lot of different jobs on those sites.

On one site, I got an email from one of those websites telling me it was time to “follow up” and contact all the people I’d applied to (either by phone or by email) asking them about the status of my application. According to the website, this “should not affect the outcome.” I’ve attached a picture of the email I got, too, so you can see what it says exactly. 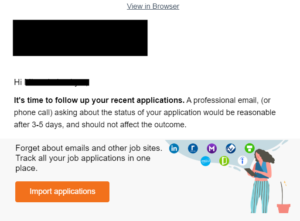 I suppose I’m wondering, is this actually good advice or not? It seems odd that they’d suggest doing something that doesn’t affect the outcome in any way, as in that case what’s the point? Especially as, if phrased especially badly, it presumably could negatively affect the outcome. Why risk it?

My instinct is to just let it be and move on, and if they want to offer me an interview they will. They have my application so there’s no need to bother them. But then if everyone else follows that advice and I don’t, I don’t want my application to be dismissed or discounted because it looks like I’m putting in less effort than everyone else. If this is something I should do, what do I say? I can’t think of anything that doesn’t potentially come off as needy or demanding. I had to write a similar email last month for a volunteer position, which specifically said that if I didn’t hear back I should contact them, and even though it all worked out great in the end, writing that email was really difficult.

First, a caveat that I’m giving advice from a U.S. perspective and can’t speak to how things might be different in the UK. But as far as things go here…

No, this is terrible advice!

The vast, vast majority of employers don’t want to receive follow-up phone calls and emails from applicants. If they’re interested in interviewing you, they’ll contact you. They know you’re interested, because you applied.

There are some employers who are so disorganized that following up with them can get them to look at your application when they otherwise wouldn’t have. But they’re very much the exception to the rule. They’re also not the employers you should want to work for — you don’t want to work somewhere so disorganized and chaotic that they make interviewing selections based on who nudges them and who doesn’t.

And after three to five days (as seems to be the recommendation in the screenshot you sent)? Good lord, no. You could mayyyyybbee follow up if it had been four to six weeks and you hadn’t heard anything. But three to five days? That’s astonishingly pushy. Most employers are still collecting applications at that point, and checking in will come across as impatient and pushy. That’s just absurd.

Now, if you had already interviewed, a few weeks had passed, and you hadn’t heard anything, it would be fine to follow up to check in then. But when you’ve just sent in an application and not had any other contact? It’s going to be annoying and pushy.

The website that sent you this email probably thinks it’s a way for them to “add value” to your job search, making you more likely to continue using them. They want you to think, “Ah, this site is organizing my whole search for me. They’re not just for finding ads.” And they want you to continue interacting with their site, and to solidify their name in your mind. They’re putting their marketing interests above the job seekers they’re purporting to serve, which is crappy.