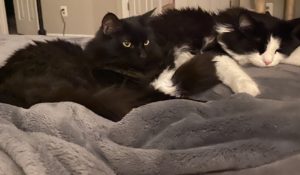 We foster failed (again) and have adopted our foster kitties, Hank and Shadow.

Book recommendation of the week: My Dark Vanessa, by Kate Elizabeth Russell, about a lonely 15-year-old who becomes involved with her teacher and later struggles to understand the relationship as abuse. It’s disturbing and hauntingly written and kept me up reading until 5 am, which is a problem but also a strong endorsement.