Here are four updates from people who had their letters answered here in the past.

1. Banning trash cans unless we sign a pledge never to put food in them

Not long after I wrote to you, the director of teapot studies (“Bill”) scheduled a one-on-one meeting with me. The meeting was held in his office. As I walked in, I noticed a stack of trash cans gathering dust in a corner. At the end of the meeting, I said “Oh, that’s where the trash cans are. I need one.” Bill became very serious and said “You can only have one if you PROMISE that you will never put food in it. And if I ever find food in there, I will take the trash can back forever.” I cheerfully said “Of course I won’t do that!” and took one back to my desk.

The next month, Bill went on a multi-week business trip. One evening I found myself the only one in the building, and I had to bring some files to Bill’s desk. While in his office, I impulsively decided to liberate the trash cans. Going around the work space, I placed a trash can in each cubicle that was missing one. The next day, there were exclamations from my coworkers: “Where did this come from?!” There was extra confusion since everyone knew that Bill was out of the office. I said nothing. My coworkers decided amongst themselves that the janitorial staff had done it. When Bill returned, he never noticed that the stack of trash cans was missing… or if he did, he didn’t say anything. Life went on. Because we were all mature, responsible adults, nobody put food in their trash cans.

You correctly pegged Bill as a tool. He is a MASSIVE tool. He has a public Instagram under his real name with suggestive photos. He is notorious for never answering emails if he didn’t like you or didn’t think your request was important. Bill plays favorites. If you are not a favorite, he will avoid speaking with you and making eye contact with you… unless he needs something from you. In that case, he will suddenly act like you are his closest friend. When one of his direct reports announced that she was leaving, Bill actually cried in an all-staff meeting while saying how much he loved her and how he couldn’t imagine going on without her.

I spent a few years in that office and I cannot tell you how many strange and unhealthy things happened. Senior leadership was almost universally toxic, and when I was offered another job elsewhere that paid more and had superior benefits, I gladly gave my two weeks’ notice. Just days before my last day, my supervisor (a good one!) was suddenly fired– in an office that NEVER fires people. From what I can tell, she was terminated because Bill had never liked her and finally convinced his boss that she should go. I’ll never forget watching my supervisor cry while she carried her personal items to her car. It was such an awful sight and a terrible way to end my employment there.

I’m happy to report that both my supervisor and I are now in much better workplaces. We respect our leaders and they respect us. I’ve since learned that Bill is actively disliked by others in our field– and no wonder!

2. Can I ask my coworkers to stop talking so much about the coronavirus? (#3 at the link)

I ended up never having to say anything. As everyone adapted to the new normal of working from home, they largely stopped talking about the pandemic on their own. The exception, which I can live with, is if there is some sort of major new development, such as restrictions easing, or the Plandemic video (which at least half of them appear to have fully bought into…sigh).

I’m writing with a somewhat boring update to my very low-stakes question. I did send a brief-but-friendly email to the professor, and he responded warmly and quickly with an introduction to someone fairly high up in the company I was interested in. She and I had coffee and really hit it off, and then she introduced me to a colleague who helped me get an interview! Unfortunately, they don’t have an office in my state (despite having several employees who live in the area), and they decided not to move forward with any candidates who were not local or willing to relocate for this particular role (the latter being impossible for me for many reasons). They ended up instituting a hiring freeze due to COVID-19 anyway, so ultimately no real loss.

However! The higher-up woman also connected me to two awesome people who are the partners of a startup doing some really fun, interesting projects in my field. I had great rapport with both of them (I had a virtual meeting with one and an in-person coffee date with the other), and I’m starting a freelance project for them this week! It’s short and not quite the work I’m hoping to do long-term, but I am really excited about the possibilities there. It’s an interesting time because in many sectors, my type of work is booming thanks to the pandemic rather than imploding.

Anyway, thank you for giving me the confidence to make that initial contact—every networking interaction after that has helped me feel more and more confident about what I have to offer, even though I’m still a bit green in my new field. Things are falling into place, at last!

I got to enjoy my new desk for three whole weeks before being sent home — see photos. I took back the pot plant and pens, but not the tea (if I’d known it would be more than a month, I wouldn’t have left it – I’m feeling the lack of my favourite flavours). I’m doing well at my job (I think!) and am now even more glad that I found one when I did. Thank you for the advice. 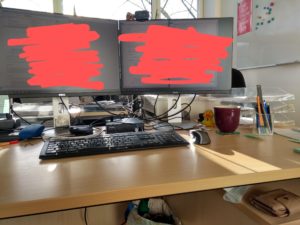 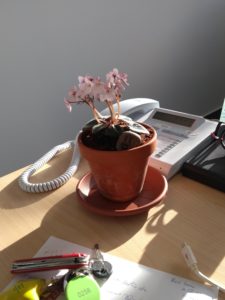