It’s Mortification Week at Ask a Manager and all week long we’ll be revisiting ways we’ve mortified ourselves at work. Here are 15 mortifying stories to kick off today.

This week I was woken up by a call from my manager asking where I was—our company meeting (virtual) had started. (I had managed to sleep through my alarms and was an hour late logging on.

In a panic, I jump out of bed, rush to my computer, and am pounding keys to try to get my computer and then zoom up and running as fast as possible. I am so stressed about this that I manage to not notice that, for the first time EVER my camera is on. And I am naked.

I drop to the floor PRAYING that my entire company has not seen me fully naked and spend what feels like hours (was like 30 seconds crawling on the floor with just my head slightly above my desk trying to figure out how to turn off a camera that I have never turned on.

A coworker did confirm that she watched it all and was laughing, but that nothing was shown that couldn’t be excused by claiming that I was wearing a tube top … still don’t know if that helps or not.

My company has a room designated for nursing mothers to pump breast milk, which can be reserved using the same system as our conference rooms. For some reason, though, management euphemistically decided to call this room the “Wellness Room,” and for several years before I realized the room’s true purpose, I — a young, cisgender man — would schedule time in the room to literally go take naps. I even used to refuse requests from my female colleagues with new children to move my block of time. What was I thinking??

Group audio call where VP said some smoke and mirrors fluff and I said aloud, “Yeah right.” I was NOT on mute and have a distinctive voice. Whoopsie ;-)

When chat systems were still kinda new, I was at work at a small-ish company. I was seated beside someone who was 1) loud, 2) repeated himself two to three times, and 3) was on a phone call. I messaged a friend, “OMG, make him stop talking! He’s repeated himself three times already! Even I know the answer!” Unfortunately, she was in a meeting, projecting her screen, with about 15 other people including our boss and grand-boss, and, well, I could hear the gales of laughter from my desk.

We all learned how to mute chat when in meetings after that.”

Many years ago I had a boss that literally no one liked. She was petty, rude, inflexible, and pretty much any other annoying trait you can think of. In a company re-org, three large offices had been folded into one so we worked at many different locations and didn’t really know each other.

One day we had a staff meeting that included about 15 of us in a conference room and everyone else, including the boss, dialed in from their locations. In the middle of our boss going on about some thing or another that we all needed to improve, someone joined late, pressed a phone key instead of saying his name, and didn’t mute. He was either talking to someone at his location or on another call at the same time.

We all got to hear him say out loud on the line something like, “Yeah, it’s another meeting with the old bag. Every meeting is literally useless.” He went on and on as the boss’s deputy, who was in the conference room with us, kept saying loudly, “You are not muted! Whoever is talking, your mic is live! Mute your mic! It’s a live mic! Mute your mic!”

As the insults continued to roll in via the clueless guy who must have not even had the phone up to his ear, both the boss and deputy boss just stopped talking as we listened to him complain about “all she ever does is yap yap yap, she doesn’t even understand our jobs.” Finally it stopped, and the boss said, “Did you want to go on? You have strong opinions about me, it seems.” Then a click and the computer phone lady said ‘*BEEP* has just left the call.’

We all sat in stunned silence. The man sitting next to me had been silently laughing for several minutes, his entire body shaking. I could feel the shaking next to me and when I looked at him when it was finally over I saw the tears running down his face. After a few moments my boss said, “Moving on” and continued like nothing had happened.”

I once spilled my drink into a vendor’s lap while at lunch – and then I started automatically wiping at his groin with my napkin. I am a woman and a mom, clearly, and he was a young man. We both nearly died.

In my early 20’s, I was working as a new receptionist in the OB/GYN clinic when a gentleman came in for his appointment. I couldn’t figure out for the life of me figure out why a man would be there, but tried to be cool about it. The doctor had requested I page him when the patient arrived (this was back in the 90’s), so there is this very nervous guy with a small paper bag that he set on the counter. I call the doctor and announce to everyone in the waiting room, “Mr. Smith is ready to come in the back.” After he left, the other receptionist had to explain to me why the guy turned bright red… Apparently, I’d named the exact reason why he was there.

One time during an interview I was asked to name the person, alive or dead, that I would most want to have lunch with. I blurted out JonBenet Ramsay without even thinking of it. Shockingly, I did not get the job.

In my defense, that story was EVERYWHERE during my formative years and I really want to know who did it.

Once, long long ago, someone handed a resume back before online apps were a thing.

He had shortened Assistant Manager to AssMan several times.

My boss had asked me to do some follow-up phone calls, inviting donors to a gala for a client of ours. I felt awkward making these phone calls, and after a few, I was over it. I asked my friend (who had recently lost her job) if she wanted to make the calls, pretending to be me. I offered to pay her and take her out to dinner. I headed to the pool and took a secret day off.

She called one donor who was actually a close family friend of mine. I didn’t realize he was on the list. They small talked for about five minutes, him thinking it was me. When my friend eventually ask if he and his wife could come to the gala, he got confused – his wife had recently passed away. I even went to the funeral! My friend acted as if she just found out, saying she was so sorry to hear about his loss. I was absolutely mortified when she filled me in later. 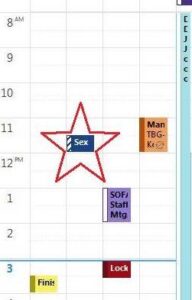 I decided to attend an on-campus lecture about sex trafficking and duly noted it on our shared work calendar.  See attached for how it actually showed up on said calendar.  That required some explaining… and comments about how it was marked as tentative. :-)

12. Tell me about yourself

In college, I once answered the question “tell me about yourself” with an entire family history and a talk about where I came from and my hobbies. Think along the lines of, “Well, I come from city, state and have 3 brothers and 2 nieces. My dog just turned three last week and likes to listen to me practice the trumpet.” I went on like that for a solid 2 minutes before they cut me off and continued the interview.

My embarrassing story just happened. I’m relatively new in my job, which is the first I’ve had with a more formal dress code and a conservative office culture. I bike to work once a week out of necessity which is very unusual in my area. Usually I bike in exercise clothes, and change and clean up when I get downtown before entering the building. I got caught in some unexpected rain a few days ago and I live on a dirt road. I was COVERED in mud head to toe. Like, I looked like I had just completed one of those mud obstacle courses. It was in my mouth. EVERYWHERE. And I was in town too early for anything to be open for me to clean up in before getting to my building. I ended up parking my bike by a river on a main road, climbing down the rocks to the water, and washing off my face, arms, and chest in the river before I changed my clothes. I still had mud on my face and shoes when I got inside. I was also so damp- I ended up asking my partner to bring me dry socks on my lunch break. But no one has said anything to me about seeing me in the river on their drive in, so hopefully I’ve gotten away with that. I’m not leaving the house without checking the weather again!

I was still a grad student, so this was an on-campus, single first year course. There was another class right after mine. I regularly ran ten minutes over. Right there I am a self-absorbed ass. The grad student instructor finally comes up to me and says, “Please, you have to finish on time so my students can get seated.” I looked right at him and said, “Don’t be such an asshole, I’m not DONE.”

Yeah, I found him after class and apologized. A lot. And stopped my class scrupulously on time from then on.

My first office job, aged 21, working in the same place as my spouse. They had a shared office and I worked on the line. I opened their door, thinking they were alone, and launched into the raunchiest possible list of things I was going to do to them— their office mate had bent down to fill a file box and heard everything. I was mortified. Spouse was mortified. Office mate mortified. I don’t think I ever entered that office again, and now as a rule won’t work with my spouse ever again (for other valid reasons lol)