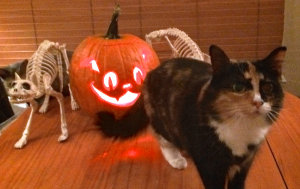 Halloween 2020 is not a normal Halloween, so here’s a round-up of Halloween posts from years past.

should I wear a Halloween costume my first week at a new job?

my boss goes overboard for Halloween

I live where I work, and now there’s a haunted house next to me

our office may be haunted — how do I keep it from distracting from our work?

my piece for Slate on Halloween do’s and don’ts

a special Halloween episode of the Ask a Manager podcast (from 2018 — with stories of people’s spooky experiences at work, including voices when no one is there, a creepily laughing doll, a fired guy’s ghostly revenge, and more)

And if you still need more, here’s last year’s post where people shared spooky things that have happened to them at work.