Christine Assaf of HRTact.com recently published a kind of amazing break-down of something I’ve been trying to convince people of for years: that your job application was most likely rejected by a human, not a computer. It’s reprinted here with her permission. (Christine, by the way, is currently looking for an HR, people strategy, or I/O psychology-related role in the greater Boston area. You should probably hire her.)

Recently I attended a presentation where a commonly held belief was repeated and I feel the need debunk this. The speaker stated “75% of applications are rejected by an ATS (applicant tracking system) and a human never sees them…” First, I want to point out that recruiters will tell you this is false. As the main users of ATSs, recruiters have extensive experience and years in talent acquisition, and will tell you they hear this all the time and they cringe upon its utterance. But if you want to know my opinion on why this “myth” has infiltrated the job seeking world, scroll past all the research and jump to the end.

Secondly, let’s track down the origin of this false statistic. The speaker I heard it from cited topresume.com. So I did some digging: 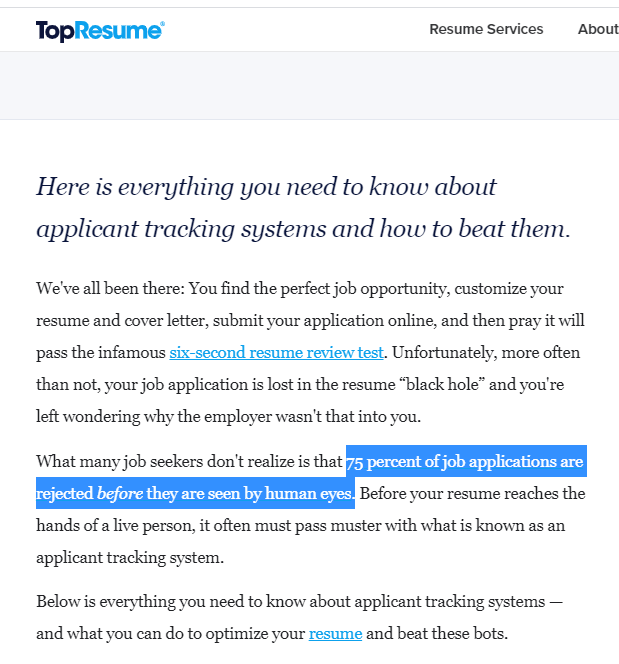 That topresume.com article (which includes the same false stat on an infographic) cites this Forbes article:

But Forbes doesn’t cite, well, anyone. But this particular Forbes article gets cited a lot in various places. Here’s one in Zipjob.com:

Moreover, cio.com uses a clever quote to make it think that Josh Bersin (of Deloitte) gives the 75% fact, but in reality they just lay it out there as if it’s truth and almost hidden as being given by Bersin/Deloitte:

The scary thing is how often I found similar statements to be uttered in online articles but with no background, link, or citation to the research or statistics behind it:

Keep in mind, this is just the front page Google SEO search. So I went a few pages deep into Google search to track down the actual “study” that everyone seems to have read. I found two websites that reference the “study.” The first from careerminds.com:

Both give no links, but instead reference “job search services firm Preptel” so of course, the next logical step is to find this company Preptel. But y’all – it no longer exists: 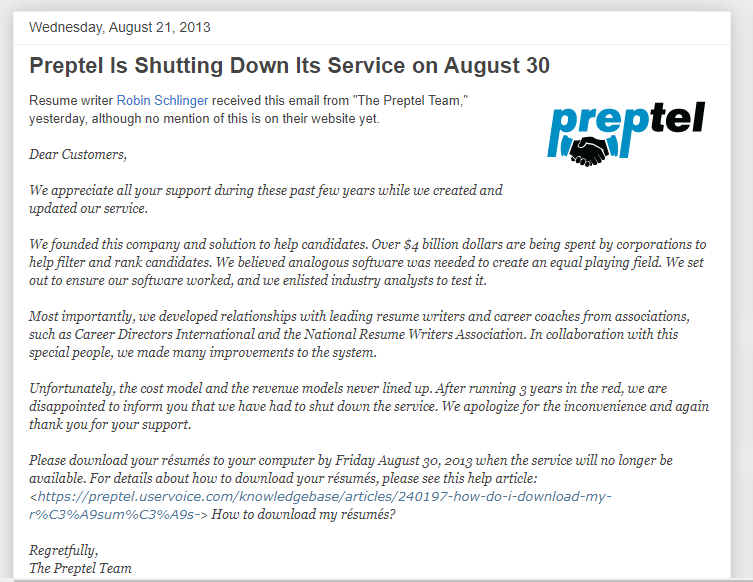 Yes, that’s right. Preptel, the company who provided amazing, job seeker resume-writing and a totally unbiased study went out of business in August 2013. In fact, remember that cio.com article I mentioned earlier that cleverly used Bersin/Deloitte quote to make it seem like the stat was legit? Welp, in this 2012 article look what they said about Preptel:

So where does that leave us? With my self-critical nature, ever the skeptic, and despite the cold-trail, I decided that there has to be some research on ATSs out there and rejection rates. Luckily, as I’m in the field of Organizational Psychology, I figured I’d put my free Google Scholar and journal publication library access to work. My keywords/terms were “ATS” and “rejection rate”. I spent entirely too long on this… and after wasting a full hour searching, I gave up. But here’s some interesting findings:

1. Found an interesting article from the Wall Street Journal (2012) that states that ATSs screen out half of all resumes according to John Sullivan, a management professor at San Francisco State University. I emailed him to ask for more info and I’ll update as soon as I hear more. 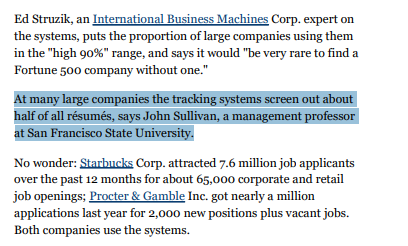 In fact, that same WSJ article is chock full of sketchy and insinuating language that, if one is not critical, would make a reader think that ATSs are rejecting applications. If you really read it – that’s not what the author ever explicitly says.

They finally say the quiet part out loud further down the article:

2. This study from 2014 from the Journal of Business Economics basically reviews ATSs and gives an empirical review of how ATSs provide a benefit to the organization (when utilized well). The authors state that ATSs provide better organization of openings and applications, better processes, and, as a result, shorten opening-to-hire time. There is no mention whatsoever of “computers rejecting applications” anywhere. And I cite an article that lacks direct information to emphasize that I wasn’t able to find any research on this premise.

3. I found a 2014 exploratory research article that discusses ATSs by reviewing Zoho Recruit (ATS software) and came to a few conclusions. They suggest that ATSs parse and limit applications and that the ATS will reject those it can’t read. But doesn’t give any experimental discovery or statistical analysis, nor does it explicitly say that the ATS will review and reject a job application.

4. Lastly, here’s a good article from the New Hampshire Business Review (2015) by Bill Ryan, a career services business owner, who talks about how ATSs don’t reject applications but instead what he calls “contextualize” applicants for recruiters.

Look, the statement “75% of applications are rejected by an ATS system” is just false. It’s false, because there’s no concrete source data, or research to even back up the statement. In my opinion there’s three reasons why this myth exists and persists:

I’ll once again reiterate that myself, many of my fellow recruiter colleagues, and even ATS companies will tell you that a computer is not rejecting your job application. Typically, the ATS is sorting it and a human is making the final rejection. So please, let’s stop continuing to use outdated and unsupported statements about ATSs. Thank you.